Another meze at Kira Georgena taverna

About four months ago, some visiting friends took us out to eat at a local taverna whose name in English is Kira (or Kura) Georgena.  We liked it so much that when other friends were visiting last week, and wanted to take us out for meze, we suggested the same place.

Meze is a wonderful way for groups of people to eat in Cyprus. The idea is to have small portions of large numbers of different kinds of food, brought out gradually through the evening.The price per person is typically between about 15 and 18 euros, which sounds like a lot; but with four people it's usual to ask for a meze for three people, as there's always a vast quantity of food and not everyone likes everything. So that's what we did.

I remembered to take photos, this time, and we even attempted to count the dishes; we kept losing track, but think there were about thirty in all, excluding the dessert.

The starter - which comes very quickly - is typical for a meze: a Greek salad (mainly cucumber, tomatoes and feta cheese), a plate of pickled vegetables and quail eggs, bread and dips.  There were two kinds of bread with the starter: some toasted bread dipped in olive oil and herbs (delicious!) and some pittas, and four dips: tzatsiki (cucumber in yogurt), tashi (a specialist tahini dip), humus (the well-known chickpea dip, oozing with olive oil and very tasty), and an egg-feta dish which, the waitress informed us, was their own speciality. 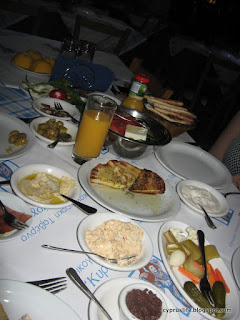 So that was twelve different dishes just for the 'starter'.  It would be very easy to fill up on this - and I liked the dips so much that I had quite a bit, although I didn't have any of the meat or cheese.  But we hadn't finished when the next two dishes arrived:  some freshly grilled halloumi, and this, a tomato/cheese dish which I don't remember seeing before, somewhat reminiscent of pizza: 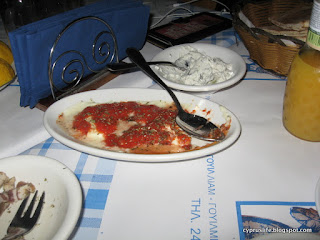 One of our number is a vegetarian, and I incline that way myself, so I wasn't going to take photos of the meat dishes; but the two meat-eaters said that the next item to arrive, two different kinds of sausage, was so good that it needed a picture: 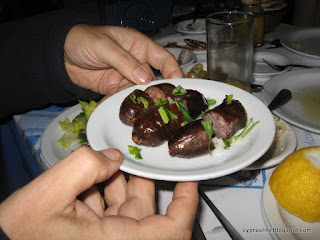 Then some baked eggs arrived with some hot olives (we didn't know whether to count that as one dish or two - but it was on one plate) and some warm local fluffy bread: 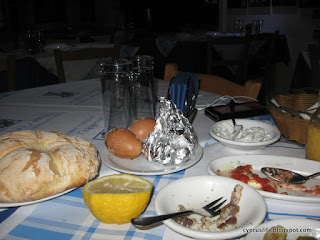 There were a couple more meat dishes that arrived while I was still eating salads and dips, and some mushrooms cooked in scrambled eggs, which I enjoyed very much.  Then a medium sized plate of chips (french fries to any US readers): 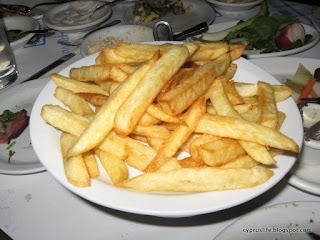 Not all mezes include chips, which I suppose are a gesture to the international nature of many visitors and residents of Cyprus, and we were all feeling quite full by the time they arrived... but when we started eating 'just one or two' each, we discovered that they were light and perfectly cooked, and so delicious that we managed to finish them.

By this stage we had been given about twenty-five dishes, including several kinds of meat. We were asked if we wanted 'escargots', and declined politely but firmly.

A bigger plate of meat then appeared; this usually signals the end of a meze, and as we were all very full by this stage, we decided that we would probably ask to take most of this home with us: 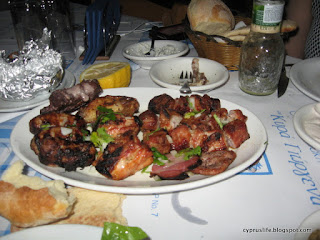 We counted that as one 'dish' but there were three kinds of meat on the plate.

And food kept coming. The deep-fried courgettes, as last time, were my favourite: 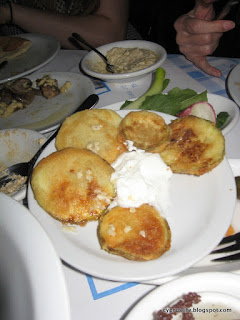 I ate very slowly, as I was extremely full but wanted to enjoy them.  I didn't even touch the rocket-and-egg dish which arrived at the same time, although it looked good, nor the pasta with grated halloumi: 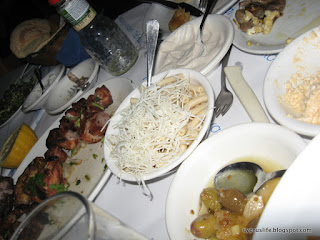 I don't think I've remembered everything, but that's most of our meze.  We were even given an extra dish of humus as we'd finished the first one.

Thankfully we were given ten minutes or so to digest before the dessert was brought out - all part of the meze.  Fresh seasonal fruit, candied fruit, and cherries in liqueur.  I didn't even try the candied fruit or the cherries, but very much enjoyed a strawberry and a couple of slices of orange: 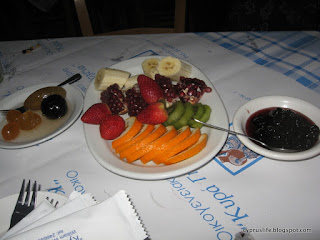 Then... fresh loukoumades.  They're not something I ever make, or buy; but these were very good ones, and since our visitors only wanted one each. I ate (blush) three of them... 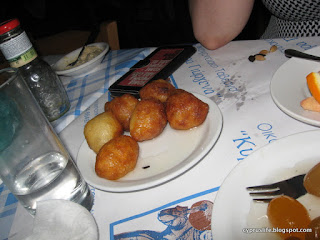 Then, when I was wondering if I would be able to get out of my chair and walk, one of our friends, who plays one of the Pokemon games on her phone, announced that there was a Pokemon just in front of the wall, next to me.  I said I couldn't see it, feeling slightly spooked, so she took a photo: 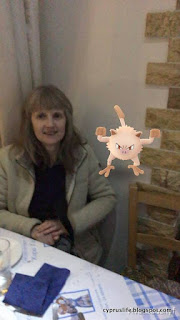