Immigration and Yellow Slips in Cyprus

Six years ago, we applied for 'yellow slips'. These are official papers which verify that someone is a European citizen who has the right to live in Cyprus. Rather than going over the reasons why we only applied six years ago (when we had already been living here for fourteen years), anyone interested could read this post about the requirements to apply for residency or yellow slips, as I went into the background in full. Indeed, until I re-read it a few minutes ago, I had forgotten why we didn't apply sooner.

However, as I wrote in this update about our experiences with Immigration, the authorities refused to grant us yellow slips. The lady behind the desk and her colleagues assured us that we could stay in Cyprus, as Europeans, and that we didn't need yellow slips. We already had ARCs (Alien Registration Cards) which we were given a few months after we arrived in the country, and those were all we needed.

Or so we thought.

A couple of people commented on that post, telling us that we should talk to the British high commission, since we might, at some point, require yellow slips. But we had the ARCs, and didn't really want to expend yet more time and effort trying to convince the authorities to grant us residency, since we had the right to live here anyway.

Fast forward nearly six years, and the situation is - or will be - different, since the UK will be leaving the EU in just over a year. Probably, people tell us, Brits living in European countries (and EU citizens living in the UK) will be able to stay. But nobody really knows, and we've heard of several people having trouble getting permanent residency, or settled status, or whatever is needed to guarantee their right to stay in the UK.

So Richard decided to apply for Cyprus citizenship. I'm less worried; if we had to go back to applying for yearly pink slips, or even if I had to leave the island every three months, I wouldn't be too worried. But Richard loves being here, and is involved in his ministry work, and sailing at the marina, and has no desire ever to leave.  People are eligible for citizenship after living here for seven years, and we've been here for twenty.  So it should be reasonably straightforward...

Except that this kind of thing is always remarkably complex.  The list of what he needs is huge. He has, for instance, photocopied seven years' worth of bank statements (both Cyprus and UK), electricity bills and phone bills.  These are to demonstrate that he really has lived here for all that time. He's had to go through every one of his passports to list his entries and exits, and how many days he was here - and he travelled quite a bit when we first moved here.

He had to get newly certified copies of his birth certificate and our marriage certificate, and the deeds of our house. He's had to find three Cypriots to agree to recommend him, and also had to advertise in the local paper that he's applying for citizenship. And a great deal more which I've forgotten.  He's done these things in odd moments when his busy schedule allowed and it's taken several months to gather everything together.  He needed just a few more things, one of which was a 'police check' in Nicosia, to guarantee that he hasn't committed any crimes while living here.

A few weeks ago, he drove up to Nicosia. The police said that they couldn't do a criminal record check without him having a yellow (or pink) slip. Even though they clearly had a record of his existence, based on his ARC. When he said that we had been refused yellow slips six years ago, and told we didn't need them, they said that Larnaka Immigration were wrong, and we needed to have them. 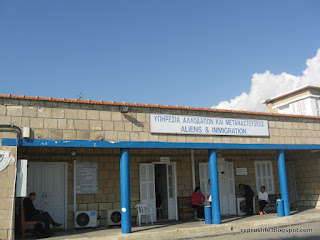 And they gave us the same form we had to fill in last time, along with the same poorly written instructions, badly photocopied and almost unreadable in places.

So, over the last week, we have gathered together the same documents we needed last time. We had our bank statements stamped, and copied; we made sure we had up-to-date medical insurance records. We printed the information about the pension Richard gets from the BBC, which he started receiving a couple of years ago. Then we checked and double-checked that we had originals and copies of everything current, including our passports and the ARCs. 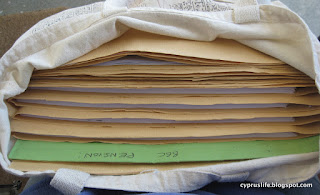 This pile of paperwork, organised into originals and copies, is only about a third of the size of the pile of paper that Richard needs for citizenship.  At least Immigration only want the most recent three months' worth of bank statements, not six years' worth, and they don't need to see utility bills.

We were both quite stressed about it. And whereas, last time, we assumed everything would go smoothly, we were a lot more concerned this time. We asked people to pray for us, and were assured that many were doing so.

The sun was shining and it wasn't too chilly when we arrived at Immigration a little before 10.00am yesterday.  We went to the secretarial office, and said that we were the 'extra' appointment, and the lady there called out to the next-door office in Greek, with the word 'extra' rather prominent.

We sat outside and chatted a bit.  I read a chapter or two of the book I'd brought with me, and we watched the other applicants coming and going. Most of them looked like Eastern Europeans, with a few Asians - probably maids or other domestic workers. Some of them were with a Cypriot, who was probably their boss.

Some people relaxed on the hard benches with books and snacks, enjoying the sunshine.  Some paced about.  Lots of them smoked.  They evidently had appointments at fixed times; as one person or couple came out, others went in. Occasionally one of the Immigration officers came out and called someone's name.  Many other people went into the secretarial offices, probably making appointments for weeks ahead.  Some folk left and returned half an hour later, perhaps with paperwork they had forgotten.

And we sat on the bench at the end of the porch, as far away from the smoking as we could be, wondering if we would really have to wait until one o'clock... 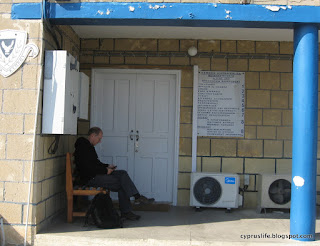 Around 11.30 there was only one other person waiting outside.  An Immigration officer came out and called a name a few times, but there was no response. Someone came out of the secretarial section and chatted to her, and then she went back inside. Then she came out again, and asked us if we had an appointment. We said we were the 'extra' appointment, so she asked our names, and then invited us in.

She quickly realised that we had all our paperwork well-organised, so after taking our passports and ARCs, she simply requested the copies of all our documents. She didn't even look at the originals. When she got to the bank statements, she asked about Richard's pension and he showed her where it was credited. We said that we receive other income - gifts from supporters - but she didn't ask anything about those, just nodded.

When she started typing information into her computer, we became hopeful. When she printed and handed us receipts for our payments (twenty euros each - it's gone up in six years!) we knew everything was almost certainly okay. Then we had to have our photos taken, and within about ten minutes of going into the office, our yellow slips were printed and handed to us.  No expiry, the lady told us, because we are Europeans.

I asked what would happen when the UK is no longer part of the EU, and she said that she wasn't sure, but thought the yellow slips would still be valid. We could apply for permanent residency for extra security, she said, but told us not to do so until they know what's happening, and what they are supposed to do. Richard told her that he's applying for naturalisation/citizenship, and she said that yes, that would mean he didn't need to do anything else. But she didn't think there would be a problem anyway.

We decided to have lunch out to celebrate.  We went to Gloria Jeans after walking along the sea-front deciding against most of the other places, and had paninis and coffee... they even had coconut milk. 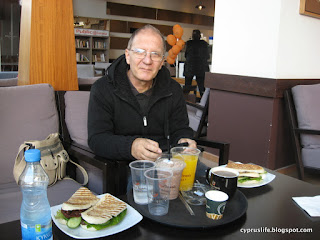 So at last, after twenty years in Cyprus, we have yellow slips. We are extremely thankful and relieved.  Next week, Richard can have his criminal record check.
Posted by Sue at 16:55

What a major headache but you should feel better now.

Thanks for the correction at my place. I kind of had doubts after I published that, thinking trash might be more American than British.