Two months ago, I wrote a post about having our air conditioners cleaned. I mentioned that the one in the guest flat front bedroom no longer worked, so we had to have it replaced.  This wasn't difficult; after a little online research, we went to our favourite white goods shop George Theodorou.

We bought the least expensive one whose brand we recognised, and which was recommended by the shop owner. A few days later it arrived and was installed, with minimal difficulty.  It's on the ground floor, and there was already a hole in the wall, wiring in place, and a suitable place for the outside part. Since the old one was at least fifteen years old, the new one should be far more efficient, and also quieter.

About a month later, I was sitting outside in our side garden after walking with my friend Sheila. We had guests in the flat, and they were using the air conditioning.  There was just a gentle purr, rather than the rather obvious noise that the older one had used. I commented that it would have been nice to have a new, quiet and more efficient one in our bedroom.  But we certainly didn't want to have to pay two installation fees, to have a new one upstairs, and then to relocate our current one in the guest flat.

Besides, we didn't know how long our upstairs one would last. It was also at least fifteen years old, probably more. But it was working fine... 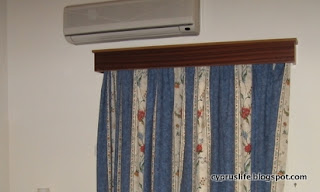 .. or so we thought.  Until one morning when I woke up and it was on, although I was certain I had set it to go off after an hour. The following night, I was awake when it went off... and then it came on again.  And refused to take any notice of the remote control. And it seemed to be getting colder... so eventually we turned it off at the wall.

We changed the batteries in the remote; when that didn't help, we tried using a different remote (as there were three other identical air conditioners in the house).  The same pattern repeated. And unless we switched it off at the wall, it would turn itself on at random times.

Evidently we needed a new one - and it wasn't a difficult decision to return to George Theodorou, where the same product we had bought in May was ten euros cheaper.

Unfortunately, there was no way to get the external unit out of the window and secured into the brackets - or, indeed, to remove the old one.  So the installers had to rent a fork-lift truck for an hour, which cost us an extra forty euros. But there was no alternative: 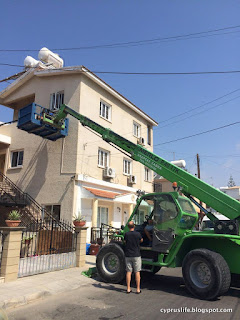 Sheila took this photo; if she hadn't, we would have no record. I was trying to look after our nervous cat Lady Jane who dislikes workmen of any kind.

Eventually it was installed.  It's smaller than the older unit, so at some point we'll have to touch up the paintwork on the surrounding wall.  But that can wait until the Autumn. 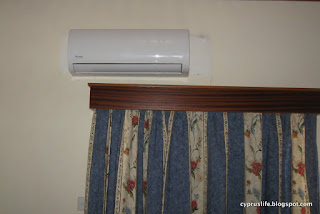 The remote control has many more options than the old one.  The temperature setting is obvious. We use it at 28 or 29 degrees Celcius, to remove the humidity and cool slightly; too much cooling isn't healthy and can also be very expensive.  When coming into the room from 30 degrees and humidity in the bathroom, 29 degrees and dryer feels wonderful, particularly when the ceiling fan is circulating the air too.

We knew about 'swing' too.  That moves the air more effectively than having it just pointing in one direction.  And we were relieved to see a 'lamp' option which allowed us to turn off the large LED light at the front of the air conditioner, when it's on.

But the other controls were a little confusing. 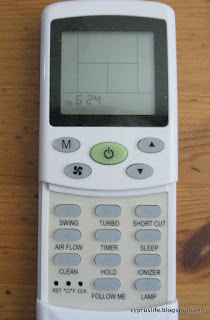 The instructions were only in Greek, and we could not find this particular brand online in any other language. We haven't yet used Air Flow, Turbo, Short Cut, Clean, or Follow Me.  We decided to use the ioniser, which apparently should help to clean the air and reduce the dust, though we haven't noticed any particular effect.  We tried 'Sleep', one night, assuming it would turn itself off. It didn't. It seemed to get warmer - not turning itself off when it reached the set temperature, but (apparently) blowing warm air out. We definitely didn't want that!

On our older air conditioner, there was a 'timer' button which let us tell it what time we wanted it to turn off (or on, although we never used that option).  We assumed this one would be similar.  It is... but rather more complicated. And with an odd quirk that if I set it to go off (for instance) at 11.45 pm tonight, then tomorrow I will have to adjust it by at least one minute, making it turn off at 11.44 (or 11.46).  If I try to keep it at the same time, it refuses to take it.

I don't know if our electricity bill will be a lot lower due to this more efficient air conditioner; but it should be considerably better for the environment.  We're wondering, now, about replacing some of the other older ones before next summer, and possibly using them more often than we do to keep the house less humid during the worst of the Cyprus summer.
Posted by Sue at 19:01