Preparing to Travel from Cyprus to the UK

We usually - in the pre-pandemic days - travelled to the UK at least once per year, sometimes twice. All our immediate family members live in England now, scattered around the country. Last year we had to cancel the week we had booked with our sons and grandchildren in Scotland, as travel was impossible. I kept hoping to be able to visit, all through the Autumn of 2020, but it wasn't to be. Our younger son didn't even manage to come out to Cyprus for Christmas, for the first time in over a decade.

I say this not as a complaint, but to give some context. Many are much worse off than we are from the family visit point of view; some, sadly, have lost loved ones during the past eighteen months.

Cyprus has done fairly well as far as vaccination rate goes, though it was awhile before we were eligible to be jabbed. I had my first Astra-Zeneca dose in May, the second in July. Back in May when I booked it, I was somehow hoping that it might be possible to travel in August, and that being fully vaccinated might help.

By the end of June, I was beginning to think we might have to wait another year without seeing any of the family, and that vaccination status was irrelevant. But in early July, realising that my passport would expire in November, I applied for a new one anyway. I knew that if any chance of travelling did come up, I would need at least six months' worth of validity... so I thought I might as well apply rather than potentially leaving it to the last moment if a travel opportunity came up.

The site for applying online was surprisingly easy to navigate, clear in its instructions, and even allowed a digital photo taken on a phone. I had to send my old passport to the UK via recorded delivery, but was pleasantly surprised that, rather than it taking 11 weeks, as the site suggested, I had my new passport back before the end of July.

But the Covid case numbers in Cyprus were very high, and it was in 'Amber' status as far as the UK went. That meant that in addition to having to do a pre-flight antigen test, visitors to the UK had to book two PCR tests after arrival, and self-isolate for ten days. An annoyance for Brits returning home, but really not an option for tourists, nor for visiting the family, unless the family lives somewhere isolated already and one is not trying to see a large number of different people.

Then it was announced that, from August 2nd, fully vaccinated tourists from 'Amber' countries would NOT need to isolate on arrival in the UK.  My heart beat a little faster. Maybe we would be able to see the family after all..

We started putting out feelers, wondering whether to fly at the end of the first week of August, Richard staying for ten days or so, while I might stay longer.  But nothing quite came together, and I never felt 'right' about it.

Then, gradually, another plan evolved. I wouldn't stay longer than Richard- I wasn't entirely happy about using public transport - and we would play to stay at Travelodges or AirBnBs instead of with family members. That would reduce contact time at night and breakfast and would be less hassle for those we wanted to see.

This time, our suggested dates worked for everyone. Flight prices were surprisingly low (although car rental wasn't!) and we were able to find suitable accommodation in all our planned locations.

Of course it's not that simple, this year. We had to book pre-flight tests. The UK government website makes it clear that they don't have to be PCR tests, they can be the rapid antigen tests, but must have paperwork saying they meet certain criteria. We also had to book PCR tests - just one each - to use on Day Two in the UK.  That was quite complicated to arrange, and a tad pricey, but the AirBnB host for that day was happy to receive them on our behalf.

On August 11th, the day before we were due to fly, we went out to get our antigen tests. The first two pharmacies we went to were closed for most of August. We looked at a suitable lab, but there was a long queue in the hot sun. We eventually found a pharmacy with rapid tests being done outside, with no queue. The people involved in the testing looked at our printed list of UK government requirements, and said, 'Yes, yes, we do that'.

'Is it okay for flights to the UK?' we asked.

'Yes, no problem,' they said. We would have a printed form, they told us, and a text message on our phones. Eight euros each, which seemed reasonable. And while we were there, we bought some high quality masks to wear on the flights.

It was the first time either of us had had a Covid test, and it felt like a slight tickle in the nose. I was surprised they got anything at all. The results (negative, thankfully) appeared in about two minutes. Then we were given our forms, which looked very scrappy, and were mostly in Greek: 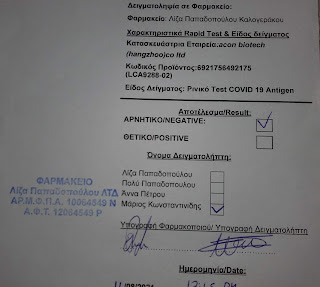 We were assured that everything was fine, that there were no other forms or paperwork they could do, and that the government would send us a text message with more information.

A while later we did indeed receive text messages from the government, confirming that we were negative. This would be fine if we were just wanting a 'safe pass' to go to a big shop or church service. But since we're both fully vaccinated, we don't need those.  I didn't feel entirely happy about it, but hoped it would be all right.

After that, we had to fill in the UK passenger locator forms, which must be done online. I don't know what people do if they don't have access to a computer.  It was reasonably straightforward, with options to check and edit every field if necessary, but a lot of information was required. We printed them out... more paperwork.

In the evening we discussed our pharmacy antigen tests with a friend, who pointed out that the pharmacy hadn't even put our dates of birth on - and that's a requirement. Nor did they have any phone number to contact them. Perhaps, our friend suggested, we could go back and ask them to add this information, and give us a contact card.

But on Friday morning, the day we were due to fly, we decided that, rather than get into a possible argument/debate with the pharmacy, and - more importantly - risk being turned away from the flight in the evening, we would go to a lab, even if we did need to queue for half an hour or more. Thankfully we didn't need to wait more than a few minutes, and it all seemed much more professional. And they only cost five euros each.

Best of all, they gave us printed forms that included all the necessary information (I have, of course, cropped parts with personal details from this photo - but it shows how much more professional it looks than the first one) 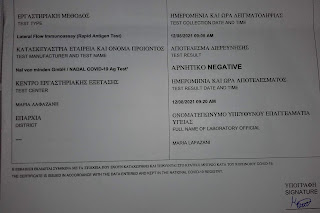 Having said that, there was a slight glitch when Richard saw that they had spelled his name wrong, and they initially gave me someone else's form. So they had to re-check and find mine, and edit his name to print another. But at last we had what, we hoped, we needed.

When we got back, we sorted out clothes to take, and worked out that we wouldn't need to book an extra bag, as Richard had feared. So we wondered if we would be able to check in online. Most people we know of who have flown in the past couple of months have said it was impossible - the airport staff want to check every document. It's not unreasonable, since they have to check certificates etc, and apparently doesn't take much longer.

But he tried anyway, and to our surprise we succeeded in checking in. Boarding cards appeared, not to be printed but for our phones. Just as well I have a smartphone now. We were only flying with hand luggage - on a slightly upgraded kind of ticket that allows two full-size cabin bags, and two smaller under-seat ones.

So the boarding pass was paper-free, but the amount of paperwork we had to print was considerable: 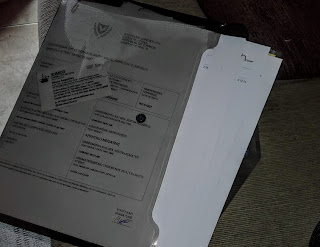 That included information about all the locations where we were staying, the rapid test results, details of the ordered PCR tests, car rental... and details of the flights too, although we knew we probably wouldn't need those.

When we arrived at the airport, we went straight through security with our phone boarding passes, and the various checks - passport, luggage scans etc - were much quicker than usual. The airport looked almost empty - we had never seen it so quiet. We had quite a wait, and were wondering if we'd have to show the antigen test paperwork to anyone - but we did, at the boarding gate. A man there asked to see our vaccination certificates, and also the negative test results. Thankfully everything was fine, and we finally boarded the emptiest flight I can remember.

At last, I allowed myself to hope that we really would soon be seeing our family!

This is truly excellent news!!! I hope, and pray, that you will enjoy the time in the UK

Thank you so much! We did indeed have an excellent time, and managed to see almost all our immediate family. Now we're back in Cyprus.

So happy for you!!