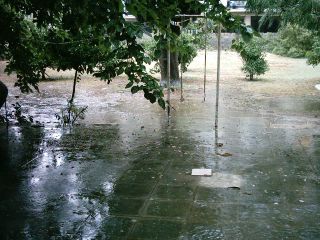 The patio was soon flooded, and it looked as if our entire back garden was turning into a mini-lake. I suppose that's because the ground was so hard, the water just sat on top. Eventually it soaked in. Of course it's very good for the garden - maybe our grass will even turn green again - and I won't have to do the watering I had planned either tonight or tomorrow! In fact I might not even water on Saturday as it's been so thoroughly drenched today.

After about forty-five minutes the kittens were getting hungry so Tim passed some food out of his window for them, and I decided to go inside. So I folded the towel and left it on the steps, and they curled up to sleep there once they had finished eating. The rain continued heavily for another hour or so, and then it rained lightly for a while - it was over two hours worth of rain in all. Rain at all is almost unheard-of this time of year, rain like this was just incredible. Dan said the roads were flooded several inches deep.

By about 6pm the sun was poking through the clouds, the rain had stopped, and the floods had abated. So Richard found a couple of other cardboard boxes for the kittens, I found them a replacement old plastic tablecloth to put their food on since the original one was so muddy and dirty it was unrecoverable, and I found another one to put over the top of the cardboard boxes just in case it rains in the night. At least it should protect them somewhat.

Email ThisBlogThis!Share to TwitterShare to FacebookShare to Pinterest
Labels: garden