Rain and yet more rain 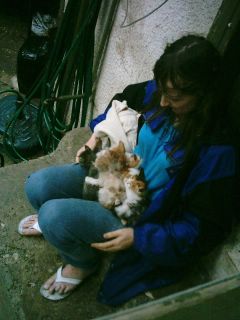 After about ten minutes my legs were getting cramped and my jeans were soaking, and I realised I had only six of the kittens on me. I managed to gather them all up in my arms and move to the steps outside the kitchen, which is pretty well sheltered. I found the seventh kitten already there, mewing rather pitifully, looking as cold and sodden as the others.

Daniel brought me an old towel so I was able to try them one at a time, while the rest sat in a huddle on my lap, gradually warming up. There was thunder echoing all around which slightly worried them, but they were more concerned about being warm and dry; once they were dried they started washing each other and purring.

I stayed where I was for about half an hour, with Tim chatting to me sitting on his windowsill which overlooks the steps. We were amazed at the quantity of rain that was falling - heavier than we've seen for many months. There were several leaks in Tim's ceiling, so he found buckets and cool boxes to catch what he could. He also found a slight leak in the dining room so covered all the computers with plastic sheeting. Of course he had switched their computer off at the first sign of a thunderstorm, and I hadn't turned mine on yet - but we still didn't want them getting wet.

Email ThisBlogThis!Share to TwitterShare to FacebookShare to Pinterest
Labels: computer

We really must be on the same weather pattern. We had thunder and lightening that shook the apartment last night.

An off subject question for you: Somebody recently encouraged me to look a little more into Enneagrams and, suprise, suprise, I am the same type I saw you are from your Blogger profile, 9w1. I haven't really read that much into it yet, but I thought you might have some suggestions?
Ta!

In my opinion, the best Enneagram book is 'Wisdom of the Enneagram' by Riso and Hudson. There are many websites which give short descriptions and explanations, and some forums - but it wasn't till I read 'Wisdom' that I began to see how the ennea types interrelate, and how they go really much deeper than is obvious from the sites.