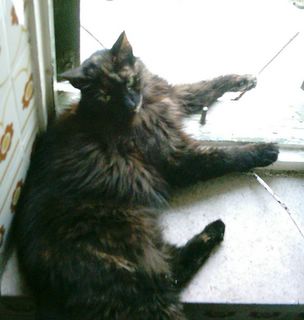 Having taken so many pictures of the feral kittens lately, I thought perhaps I should have some of our own cats for a change. Here's Jemima, whom I've written about a fair bit recently...

She went missing for three days last week, and reappeared on Wednesday looking unwell, but affectionate. She vanished again later, and came back on Saturday. So far so good.

Then on Sunday morning when I was getting out of the shower, Dan called out that Jemima was staggering around the kitchen. By the time I got there about three minutes later, it looked as if she was limping slightly, but then she was fine. A little while later I saw her sleeping on the window-sill with one leg poking out in the air, as she does sometimes... and thought, with relief, that she must have been doing that before, so her foot had simply gone to sleep for a few moments. Which would confuse a four-legged animal and make her stagger about.

Then at lunchtime we saw it happen again. She was on the floor, and suddenly appeared unable to walk. She crouched down low, looking rather miserable, and when I picked her up one of her back legs seemed a bit floppy. But when I stroked her, she purred affectionately and then jumped down about five minutes later, and was walking as normal. Strange. Daniel remembered that one of our neighbours had commented that he had seen our cats eating snakes. He wondered if one of the semi-venomous snakes had bitten her and paralysed her leg temporarily (which would have stopped her returning, of course) and that she had mostly recovered but was still having odd twinges. I didn't know if such a thing was possible, but it seemed like a reasonable theory.

She stayed in all day Sunday. She even used the cat litter rather than going out, and was very cuddly. She slept overnight in the kitchen and was affectionate again Monday morning. Then she went out... and once again we didn't see her for three days. This morning I heard her in the kitchen so went to see. She was by the food bowl, crouching down, but something was wrong with one of her front legs. She held it up strangely, and obviously couldn't walk on it properly. I picked her up, and she purred, so I brought her through to sit down for a few minutes. She looked fine in herself, just holding her leg awkwardly.

Then she jumped down, and started picking up her legs almost as if she were a horse on parade. She stamped her way through to the kitchen. It looked as if she had pins and needles... which made me wonder again if her leg had gone to sleep for some reason. Sure enough she was walking normally a few moments later. Then at lunchtime she started staggering and holding the front paw up awkwardly for a little while, and then was fine again. Since then she's had no problems although we've been watching her, and she's just gone out again.

Very strange. If she seemed ill or in pain, we'd take her to see the vet. But it's a traumatic experience for a cat going in the car, and then there would be a wait at the clinic (no appointments here - people just turn up and wait in order). If she's walking normally, then the vet wouldn't see anything wrong.

I've tried googling for advice but to no avail. She's only six years old so it seems unlikely she has any kind of arthritis, or that she's had a stroke. Besides, either of those would be likely to cause longer-term problems rather than five minutes of apparent paralysis two or three times per day. If it were a trapped nerve, then it would be the same paw each time - and again, probably more frequent. Perhaps her circulation is poor for some reason. Or perhaps Dan's snake-bite theory is correct and she's had a bite in a different place...
Posted by Sue at 15:40

Oh that is odd. I wish I could offer some helpful information of advice. My only thought would be to take her to the vet which obviously you are already considering. Perhaps just a phone call to them would be informative.

I watched her carefully on Friday, and although she didn't seem very lively, there were no problems with her paws. Today she seems better still, and is eating like anything. She's a little anxious about jumping anywhere, but then if her paw was going to sleep unexpectedly, I'm not surprised. Anyway, for now I think we'll leave her and assume she's probably OK now.