Feeding Time at the Zoo... 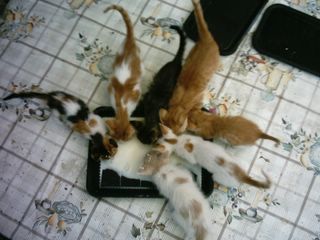 The feral kittens are now eight weeks old, or approximately so, and we still have them living in our back garden, although the tabby is trying very hard to get into the house. We keep saying we MUST contact the Cat Protection League shop locally, to arrange to have them all taken to the Paphos animal sanctuary, but somehow we don't get around to it....

They still like to drink milk, although what I give them is quite dilute: I fill a large plastic cup with 1/4 evaporated milk, 1/4 hot water and 1/2 cold water, then pour that into a tray to mews of enthusiasm. They all crowd around and drink about half of it in about twenty seconds. The large ginger tom is still the biggest of these kittens, and the little ginger tom - right next to his bigger brother in the photo - is the smallest, by quite a long way. However the one who started life as a runt, the white and orange kitten next to the little ginger one, is now bigger than his two little sisters (tabby and tortoiseshell).

They also eat kitten crunchy food - our vet told us years ago that dried food is much better for cats than canned, so long as they have plenty of liquid as well. Dried food doesn't go off in the warm weather (important in Cyprus!) and it's much better for their teeth and jaws as they have to crunch it. The kind we're buying is for kittens up to a year old, and it seems to suit them perfectly. Of course it's also good from a financial point of view since dried cat food is so much less expensive than canned!

The tortoiseshell is the closest to an Introvert out of all the kittens. I often see the others playing, while she sits washing - or goes exploring or climbing a tree on her own. Today she was the first to leave the milk and have some of the food. 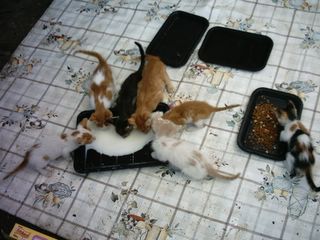 Lovley photos! I see you managed the trick of putting more then one in a post. I can't believe the difference in size between the two gingers.