Buying a microwave oven in Cyprus

It's nearly eight years since we bought our last microwave oven, although I wouldn't have been surprised to find that it was only four or five years ago. Time seems to be accelerating, the older we get. We bought it from Carrefour, where we tended to buy most of our small kitchen appliances eight years ago. Carrefour no longer exists. Nowadays, we are likely to check SuperHome Centre or Mr Bricolage first.

I explained in the post linked above that this Carrefour microwave had a grill function, and rather complex instructions which were provided in several languages, but not English. I spent some time searching online for instructions in English, and eventually gave up. I typed the French into Google Translate, then printed the result. It wasn't really any more helpful.

For instance, if I wanted to cook baked potatoes I had to remember which was the automatic menu knob, and twist that to position A5. (I only know this because I just checked the instructions - I never managed to remember any of the auto settings). Then I had to remember to confirm that by pressing a diamond button.  After that the knob could be pressed to set the weight of the potatoes (assuming I had remembered to weigh them. If not, I had to remove them and start over after weighing).  Then I had to press the diamond again. If I got any of it wrong, it lost the settings.

There was another knob to set different amounts of microwave power, or to choose the grill function, or the two combined. There was a way to set specific times too, but that was just as complicated. Below I have reproduced part of the instructions which I never managed to follow:

Press waves on the LED screen. LED Will show G. Press several times on waves or turn the knob to select the power and Desired G, C-1 or C-2 will appear alternately.

Press Diamond to confirm, and turn the knob to adjust the length of cooking from 0.05 to 95.00. Press again to start cooking.

Example: if you want to use 55% power of microwave and grill power of 45% (C-1) to cook for ten minutes, set the furnace according to this method:

2) Press again or turn the knob waves to select the Mode 1 combi.

3) Press one diamond to confirm, and the screen will show C-1.

4) Turn the knob to adjust the oven up to the cooking time displays 10.00.

5) Press on the diamond to start cooking.

There was no indication as to WHY I might want to cook anything for ten minutes with 55% microwave power and 45% grill, even had I managed successfully to set it correctly.

Besides, when I use a microwave it's because I want to do something quickly.

So in the end, the only button we ever used was the 'quick' setting, for 30 second bursts on full microwave power.  It was fine. Three 30-second bursts to heat a cup of cold coffee. About ten of them to soften potatoes prior to baking. We made mug cakes, reheated food, melted coconut oil or chocolate or dairy-free spread, cooked frozen peas, or aubergines for baba ganoush.. sometimes opening the door before the 30 seconds were up, and sometimes pressing a few more.

I suppose it was about a year ago that there was a problem with the buttons, possibly because we had used one of them extensively and nothing else. But Richard managed to open up the front panel, and replaced a part that had fallen out or deteriorated, as a temporary measure. It was very effective, and we continued using it with no problems.

However we realised that it wouldn't last forever, so we had been looking at microwaves in the DIY stores when we happened to be there. One or other of them usually had a small, basic white microwave on offer. We didn't need a large one, we told ourselves, nor did we need any of the fancy functions.

On the other hand, Richard did want a digital timer rather than just an analogue knob as he has become an expert at microwave mug cakes, and they have rather precise timing. I care more about aesthetics than precision, and really hoped we would find one in black or silver rather than white.  Nothing grabbed us, and it appeared that the digital ones were over twice the price of the basic white ones.

Matters came to a head on Monday night, when Richard heard a strange electrical crackling sound in the kitchen, and eventually traced it to the microwave, although it wasn't in use. He unplugged it and the noise stopped. He forgot to tell me about it, so in the morning I plugged it in (assuming it was unplugged by mistake - it's right next to the plug socket that we use alternately for the kettle and frappe maker) and used the microwave to reheat some coffee. Then I heard a strange crackling noise... so I turned it off at the wall and the noise stopped.

Electrical crackling noises are a danger sign, so we knew we had to replace the microwave immediately.  We checked a few places online, and eventually found one we liked the look of, at not too steep a price, at George Theodorou, our favourite local white goods shop. It had a digital panel, and it was black and silver.  This shop has always given excellent service, so we decided to buy our new microwave there.

We're not very good at disposing of old appliances. Our last non-functioning bread-maker sat on a table for several months before we got rid of it. But this time, Richard decided to be efficient. He put the old microwave oven in the car and we took it to the recycling centre before going to buy our new one.

What I did not expect was that this is also a dual-function microwave, with a grill or combined way of cooking. But... this time we have instructions in English (as well as about forty other languages), and they are so much simpler. 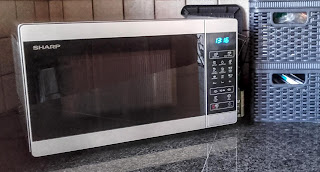 Instead of having to remember which knob to use, and which of several apparently random functions was the one I wanted, I can do baked potatoes by pressing a single button marked, helpfully, 'jacket potato'. Last night I used the 'frozen vegetables' button, and this morning the 'reheat tea & coffee' button. I can't see us ever needing the 'pizza' or 'popcorn' buttons, and there isn't one for 'mug cake', but still.  I like it. 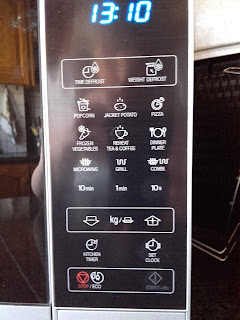 This is so much easier to use that I might even try the grill or combination setting at some point if I can figure out why I might need either of them.  And it has the added benefit that the clock stays lit, making it far more useful than the one on our previous microwave, which only showed when the oven was in use.

I expect appliances to last at least ten years, but when I checked, I found that microwaves are expected to last only about seven years (or less, with frequent use).  So eight years isn't too bad after all.