It was another lovely, sunny day in Cyprus today, with the temperature up to about 25C. I don't suppose those of you in the UK really want to know.

Sophia spent much of the afternoon asleep on my beanbag. I wonder if I should change its name to 'cat's cradle'. But perhaps she's just illustrating the saying, 'Let sleeping cats lie'. 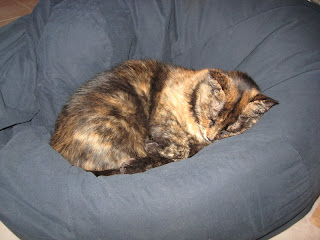 Tessie and Sophia are not related. Tessie is the cat who arrived on our doorstep, after Richard had unwisely said that we had plenty of cats. However, although they fight sometimes, Tessie seems to have a lot of admiration for Sophia. At times like this, she's something of a copy-cat.

One problem with cats is that they tend to scratch the furniture, when they're sharpening their claws. One of our sofas was getting distinctly tatty, although I've attempted to mend the worst of it. On Friday, we noticed doormats in Metro at two euros each, so we bought a couple, to place behind the scratched sofa. We hoped it might encourage the cats to sharpen their claws there instead.

I think it's working, since they love scratching at them. But today, Sophia decided instead to illustrate that famous aphorism 'The cat sat on the mat': 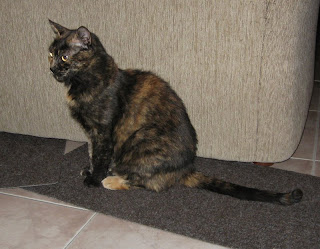 Hi Sue, we have one cat now after having 2...they also ruined furniture. We found something similiar to a the mats you bought but they are made for cats to scratch on. It came with dried catnip to put on the pad. Our cat "Regis" loves it. You might find catnip at a health food store or perhaps a pet store (if you have on). i know theres a health store in Limmosol. Beryl knows of it. You can also grow catnip as an herb. Make your cats happy!

My cat scratching the sofa and chairs drives my husband mad. We keep spraying them (the chairs) with citronella which works for a while but once the smell fades the cat picks up where she left off!