Making the Christmas cake... and an oven door problem along the way

This year, I did think about making our Christmas cake at the start of November. Briefly.

Then, when we went to the supermarket, I forgot all about it, so didn't get the necessary ingredients.

A week later, I checked my favourite recipe - for Delia's classic Christmas cake - and made a note of everything I would need, which was mainly dried fruit and chopped almonds.

Then, on Friday just over a week ago, I discovered that Metro had run out of glacé cherries, and chopped mixed peel, and chopped almonds. Last year I think I used ground almonds, but decided this year to buy some almond slices and chop them myself. I knew I could do without mixed peel, since I could buy bags of mixed raisins/currants/mixed peel.

But glacé cherries are vital. I was brought up to believe that fruit cake is not fruit cake unless it has cherries in it. There were a few jars of maraschino cherries in Metro, but they're not the same at all. Pretty vile, in fact, in my opinion.

On Saturday I went to look in our local Orphanides Express, and they didn't have any glacé cherries either.

Then, on Sunday last week, I was taking our lunch out of the oven when the inner glass piece suddenly slid down into the metal frame part of the door. Oops. Just as well I was taking the lunch out, not putting it in!

That afternoon, Richard took the door to pieces. He thought perhaps a screw had come out, but realised the glass parts were only held in place by glue. So he removed the glue, and cleaned the area with some Cif cream cleanser ... and then (every cloud has a silver lining, as they say..) proceeded to clean just about every square centimetre of the door, including both sides of each piece of glass.

We looked online, and found that this isn't an unusual problem. There is special oven glue available for just such an eventuality... in the UK. We could order some, but it would cost about £12 plus postage, and could take some time to arrive in Cyprus.

On Monday, we popped around the corner to a local hardware shop. One of the guys there spoke good English, and when we explained the problem he said we should use fireplace cement. It cost us €6, which, even with the ridiculously strong euro, is still less than half £12. I wasn't entirely certain it would work... but in the evening Richard got out his tube-squeezer gadget thingy, and put lots of this fireplace cement around it: 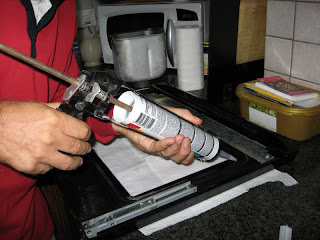 You can just see the greyish gunge of the cement in this photo, before he put the other half back: 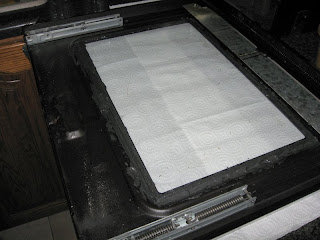 It was supposed to be left for 24 hours before using, so on Monday and Tuesday evenings I cooked our meals using the microwave and steamer. On Wednesday was the first test... the glass in the door seemed secure again, and sure enough was absolutely fine even after the oven had been on for an hour.

It's been fine all week. And looks very clean and sparkling too!

On Friday, when we went to Metro, there were four little tubs of glacé cherries there. Just four! I don't know if Cyprus is running short, or whether all the ex-pat Brits are baking Christmas cakes around now. Anyway, although I only needed one tub, I bought two... a knee-jerk reaction to finding something back in stock after an absence.

So, I thought, I would make the cake on Saturday. Unfortunately, I forgot to soak the dried fruit on Friday night after our house group, and Delia's recipe requires 12 hours of soaking the fruit in a few tablespoons of brandy.

Last night, I remembered. So this morning, when I got home from church, I set to work to make the cake at last. I used the electric mixer for the eggs, I even used real butter. I crushed the almonds, I weighed every ingredient on my kitchen scales that are accurate within 2 grammes.

The final ingredient was the grated zest of two lemons. Actually, on the online version, it says the zest of one orange and one lemon.. I don't suppose it makes much difference, but I had two nice lemons waiting to be used. So I washed them carefully, and dried them on kitchen roll. They were still slightly damp, so I thought I'd leave them a couple of minutes, while I lined the cake tin.

It's not hard to guess what happened. I lined the cake tin exactly the way I was taught at school (probably the one thing I remember and actually use from my secondary school!) then I spooned all the cake mixture into the tin. I went to find brown paper and string (I had to raid Daniel's room for that, but I knew he'd be bound to have some) to tie it up, as Delia recommends, and put it in the oven.

Then I started to tidy up the vast amount of mess that had somehow accumulated. And there were the two lemons, beautifully clean and dry, sitting next to the sink.

I don't suppose lemon zest affects the consistency of the cake at all. I don't think it makes a whole lot of difference to the flavour, either, although we'll find out at Christmas. But I realise it DOES make a difference to the scent of the cake. I expected a gorgeous aroma to emanate from the kitchen... but it didn't. It was pleasant enough, a sort of cakey smell, but not the wonderful Christmas cake scent I was expecting. I never knew the secret was in the lemon zest. 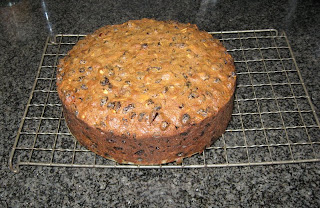 Looks great! What would happen if you grated the lemon over the cake for the time you have it wrapped to use at Christmas? It would probably soak in some. So glad you found the cherries, I have a small container I bought 2 years ago....hope to use them this year!

Looks great-far better than mine which does contain the zest of an orange and a lemon!