At the back of the house which we rented for nearly nine years, there was a huge garden. Mostly something of a wilderness, but it had some amazing trees. There were three flourishing lemon trees, as well as two or three newer ones. There was also a fabulous orange tree. There were pomegranate trees and mespila (loquat) trees and mulberry trees too, but I don't miss those in the least. Nor do I miss the garden. But I did enjoy being able to pick oranges or lemons for several months of the year, any time I wished.

When we moved to this house, with just a patio at the front, we bought an orange tree and a lemon tree, in pots. They don't seem to be doing anything spectacular, but each one produced exactly one piece of fruit this year. We've watched the lemon for some months now, first small and green, then lemon-sized and green, then gradually turning more and more yellow. 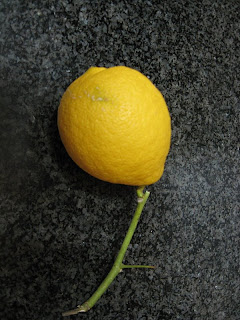 This week, we used it. In some hot honey and lemon at bedtime, since we were both feeling slightly cold-ish. And somehow it did taste better than making the drink, as we usually do, with lemons from the Froutaria.
Posted by Sue at 19:47

I hadn't noticed the lemon missing, but when I just read this out loud, Marie said that Lukas had noticed and was shocked, and Marie wasn't sure whether to believe him that he hadn't taken it. Good to know that he's cleared! (This time...)