It's not often that we see attractive sunsets in Cyprus. Clear skies during the day mean that the sky simply darkens around sunset, fairly rapidly, and then it's night time.

But a few days ago, I happened to glance up as I was sitting at my computer, and saw this: 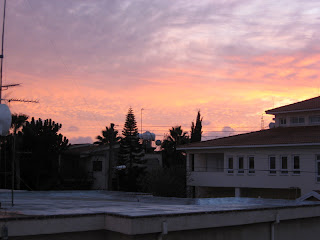 Well, that wasn't the exact view I saw. But the sky was like that. So I grabbed my camera and went out on my little balcony, and took several photos, of which these views were the best: 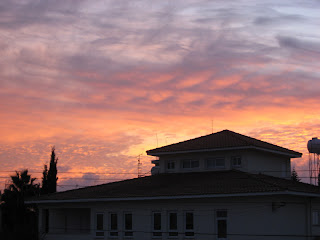 It didn't last long. Five minutes later, and the sky was dark. Still, I hoped it was enough for any shepherds in the neighbourhood to be delighted. Not that I've ever seen any sheep in Larnaka.

It wasn't even particularly accurate, as far as sky predictions go. It didn't rain the following day, but it was a bit grey. In fact, the sky was grey all weekend. Richard was in Limassol, doing the last part of his Day Skipper course so it's a good thing the weather stayed fine, albeit a bit dull.

But on Monday morning there was a brief storm with a lot of wind and a very light sprinkling of rain for a few minutes. And today there was a bit more rain.

Richard tells me that according to the weather charts - which he studies extensively these days - there is usually a big storm in Cyprus on or around February 9th. It still looks somewhat grey outside, although the sun shone for an hour or two just after lunch, so it may still come.
Posted by Sue at 15:59