Last night, we said goodbye to some visitors who had been staying in our guest flat for the past ten days.

Today is a public holiday, for Ascension Day (in the Eastern calendar). Richard has gone sailing, so I have a day all to myself, and am trying to catch up with various things. Including this slightly neglected blog.

So here, without further delay, are a series of photos from last Friday, when we took our visitors on a trip to the village of Lefkara, part-way up the mountains.

As usual, we parked at the start of the main village of Pano (upper) Lefkara. A few years ago, this shop was thriving - full of the traditional lace, and other items, with friendly owners who loved to entice visitors in and ply them with lemonade, and hope they would buy there rather than venturing further into the village where prices were often less.

But for the last few years, this shop has been closed, with no signs of re-opening: 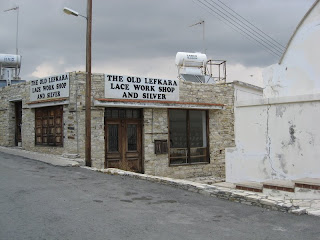 As we started to walk into Lefkara, we were surprised to see that several other shops appeared to be closed too: 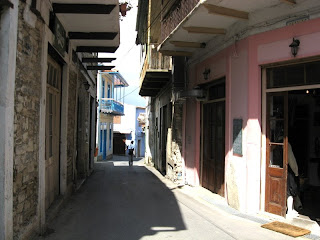 Perhaps the global recession has hit Cyprus this way, in that there are fewer tourists, and thus many of the Lefkara shops - which appeal mainly to foreign visitors - are not able to continue. 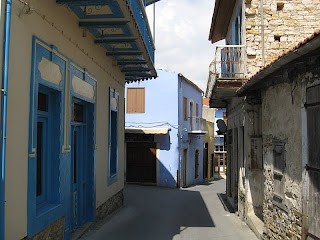 However, when we reached the main part of the village, we were relieved to see that many of the traditional shops were open as usual, displaying their wares on the walls outside: 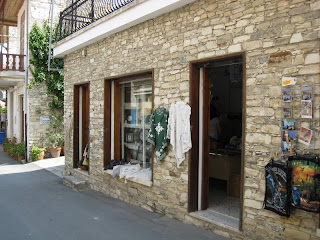 As well as the traditional tablecloths and other linen, there is, of course, a large amount of 'tat' designed to appeal, no doubt, to those wanting souvenirs with the word 'Cyprus' rather than traditional (and often expensive) Cypriot handicrafts. 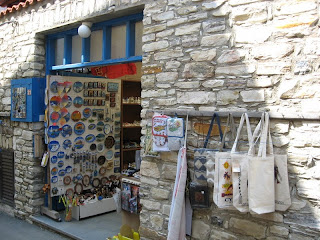 One of our visitors collects small elephants. We had never really looked at the small ornaments before, and I was quite surprised to see just how many there were on display, some of them beautifully made (although others were far too ornate for my tastes) 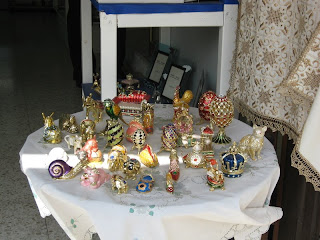 After the purchase of two small elephants - one silver, one gold-plated and ornate - and a bracelet, our visitors treated us all to ice creams at a corner cafe.

It was a pleasant afternoon in an attractive village. We just hope the entire village doesn't end up as a ghost town within the next few years.
Posted by Sue at 14:22