I don't go sailing. Not that I have anything against boats - I'm quite happy to be on a ferry, and more than happy to visit Daniel on the MV Doulos. But I don't do at all well in sunshine. Just half an hour outside in the summer without shade would give me a migraine. On Richard's boat, there is no shade at all.

So, most Saturdays he goes out sailing with other people, which he loves to do, and I enjoy a peaceful day at home on my own.

But last Saturday, he agreed to take a family who live nearby who have become good friends in recent months. There are five children, one of whom is only eight months old, and thus too young to be taken on a dinghy. So since Richard and Neil, another sailing friend, hoped to take all the rest of the family out at the same time (two adults and two children in each boat) I agreed to go to the sailing club with them, and look after the baby. She's a lovely little girl who knows me quite well so I didn't anticipate any problems.

The day was warm, but not unpleasantly hot. The conditions were perfect for teaching beginners, with calm sea and very light winds. Between them, Richard and Neil managed to find sufficient life jackets (technically buoyancy aids) for everyone, including three-year-old Katie.

Even better, Neil rigged up an ingenious shade on the beach using the cover of his boat, an old broken trolley, some rope and some tyres. 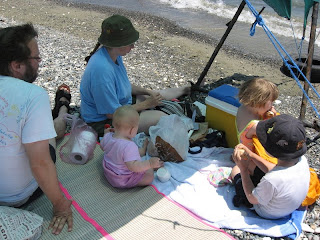 Here are the first group getting into Neil's boat: 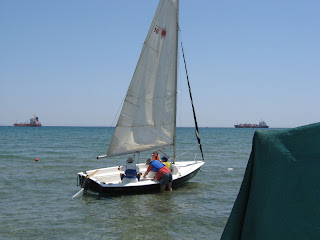 .. and here are the second group, getting into Richard's. You can see how calm the sea was! 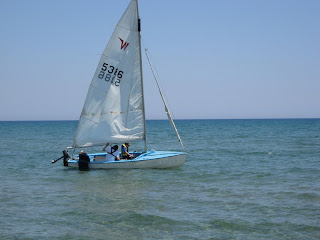 They sailed in formation out into the bay: 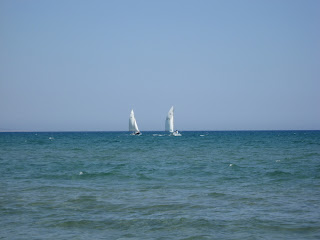 ... and then, after about forty-five minutes, back again. 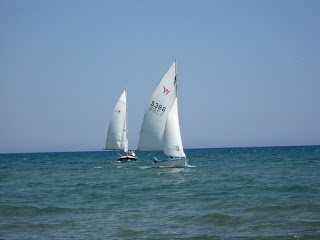 Helen, I'm happy to say, was absolutely fine with me. I did have to stop her from eating small stones, but she was fairly amenable, and didn't seem to mind being offered large stones, or keys, or even a toy instead.

They went out several more times, in various combinations. The older children enjoyed the sailing more than the younger ones, and the parents both enjoyed it too! Here they are, towards the end of the day, bringing Neil's boat in: 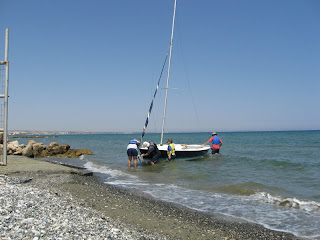 Unfortunately for me, Neil and his family had to leave before Richard had finished his last trip. So they had to dismantle the shade cover in order to put their boat away, and I ended up with about 45 minutes in the sun. It wasn't too hot; it was about 3pm by then and there was quite a breeze. But the sun was too much for me. By the time we got home I felt utterly exhausted, and had a migraine Sunday morning. Still, Richard knows now to leave me in peace when I feel that way. After a few hours by myself I was able to sort out a few things for the guest flat and go to the airport with him to meet our next guests who arrived around 9.30pm last night.

Richard also wrote about this day out, with more photos of the actual sailing and also a map showing exactly the tracks of the boats in and out of the bay.
Posted by Sue at 12:25

I'm going to Paphos later this year to the Capital Coast Resort. Do you know if there is anywhere I can go sailing? I'd like to take the family out on a boat for something different to do.

Apropos of nothing very much, I commended your blog to the blogger of Sicily scene, because you both live on islands in the Mediterranean and seem to blog about similar things, so I thought you might enjoy each other's blogs.

What fabulous pictures and a wonderful description. [Your friend Steve recommended your blog and I'm glad he did!]

ghostJago: apologies for not responding sooner. Best thing is probably to ask Richard at his blog, wayfarer-cyprus.blogspot.com as he knows a lot more about sailing in Cyprus than I do.