On Wednesday evening, our visitors had to be at the airport by about quarter to eight. It had been a lovely day - as is expected at this time of year in Cyprus - but by the evening, there were quite a few fluffy clouds in the sky.

As we drove past the Salt Lake, which (after our extensive rains this spring) is still fairly full, we saw the most glorious view of the sun beginning to set over the lake, with the clouds glowing red and orange, and amazing reflections.

There was no way to stop on the way to the airport. But ten minutes later we were on our way home, and able to pull into a little lay-by. The sun was a lot lower - sunsets happen pretty quickly in Cyprus, without much dusk - but the clouds made the sky look very attractive. I took about ten photos in quick succession, of which the better ones were this one: 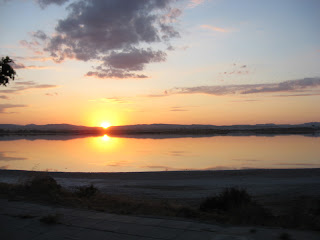 .. and, just a couple of minutes later, when the sun had almost vanished, this one: 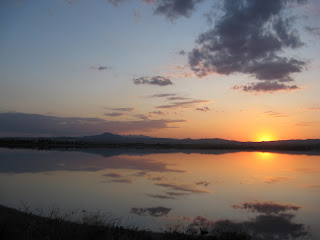