Day out in Limassol including Kurium and Kolossi

The only times we tend to see much of Cyprus outside our local area are when we have guests. Even then, it rather depends on how busy Richard is.

A friend from the UK came out recently, and spent a fortnight with us. It was a working holiday: she left her family behind, and spent most of her days in the office, doing some accounting and working on assets and doing other clever and complicated finance-related things with numbers.

On the Saturday before she returned home, we went out for the day. First of all, we went to Kurium (or Curium or Kourium or Kourion... depending on how people feel like spelling it). This is the site of the ancient amphitheatre a little beyond Limassol where there are annual Shakespeare productions, and where Richard filmed the Esther musical a couple of years ago. 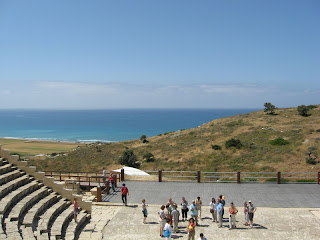 The day was gorgeous. Sunny, with a light breeze, around 24C in the shade. There were some tourists at the site, including a couple of coaches doing guided tours, but it wasn't too busy.

After wandering around the amphitheatre and enjoying the views, we went to the covered area and looked at the huge house, now mostly in ruins, and some of the amazing mosaics that still survive: 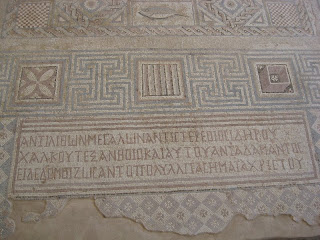 Then on to the temple and cathedral on another part of the site: 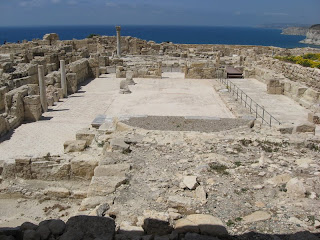 Despite the day being pleasant, I had had more than enough sunshine by the time we got there, so I found a shady area and sat down, while Richard and our friend explored the site more thoroughly. I was entertained by a couple of hang-gliders who were flying to and fro not far away: 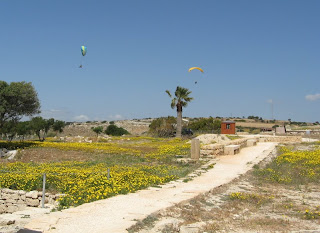 All that for €1.70 per person. Before Cyprus became a euro-zone, it must have been one Cyprus pound each, and they actually rounded down by a penny (since the exact conversion would have been £1.71). Even better, the price has clearly not increased for over a year.

After we had explored Kurium fully, we found a bakery and bought some olive and cheese pastries for lunch. Then we drove to the nearby Kolossi Castle, somewhere we had never actually visited before. Outside was a most unprepossessing café with red painted signs and high tourist prices: 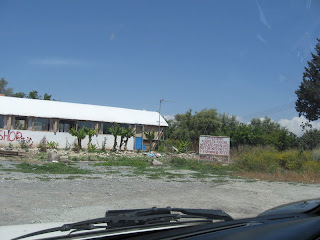 So we didn't go in. Instead we went to the castle - another €1.70 each, much less expensive than the equivalent UK prices for such attractions - which didn't look very big from outside: 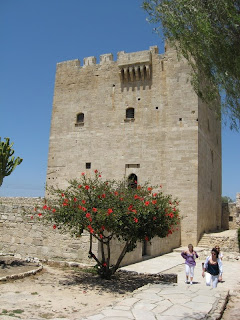 . but was surprisingly spacious inside, and very well preserved. 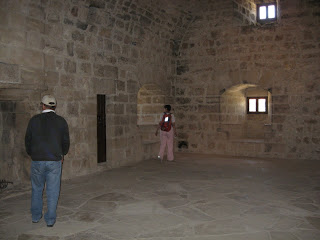 We all made it up to the top, despite my not being very keen on the stone spiral staircase! 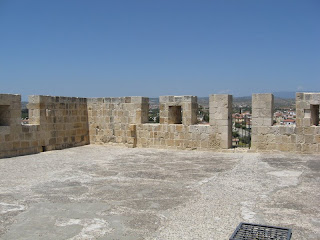 Then, having seen the entire castle, we drove to Limassol sea-front, where our friend bought us some ice creams at a van which was conveniently parked in the car park. 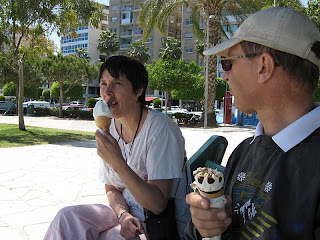 Then we burned off a few of the calories by taking a stroll along the promenade, which has a sculpture park with some displays almost reminiscent of a Middle Eastern corniche: 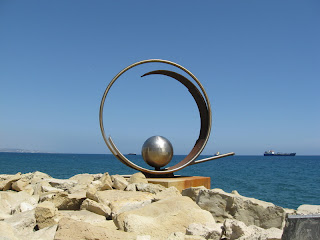 Some of the displays were just strange: 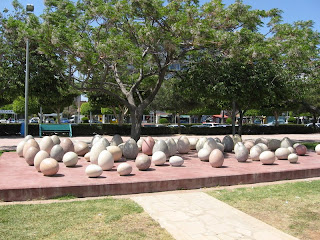 .. and others distinctly bizarre: 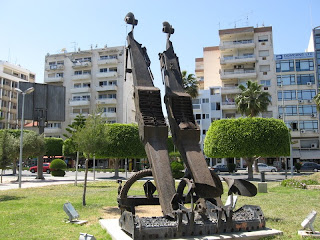 All in all, it was a very pleasant day out. We left the house about 9.45am and were back in Larnaka by about 4.30pm, time for a rest before our friend took us out to eat at a nearby restaurant in the evening.
Posted by Sue at 16:31

Great pictures Sue...I'm already sensing what we will be missing this summer by not coming to Cyprus. We've been to Kurium twice. Glad you had a nice day. Our visits have been mid summer and definitely very hot.

Limassol is our base when we visit our best friends each year. I have very fond memories of Kurion (however it is spelt). We hope to stop by Kolossi next visit.