Until 2007, I didn't own a mobile phone. The rest of the family each had one, and used them extensively, but I find them intrusive, and many of them feel uncomfortable in my hands if I hold them for more than a minute or two.

However, I was almost the last person in Cyprus without one, or so it seemed. And there were a couple of occasions in the spring of 2007 when it would have been very useful to have one. Slowly, my resistance was broken down. Richard's mother was staying here for my birthday that year, and wanted me to spend my birthday money. So I thought about a phone. We went to a local shop, resisted all the blandishments of the assistants to buy a highly expensive phone with inbuilt phones, databases and (probably) coffee-makers, and chose a nice, neat-looking simple Sony Ericson model: 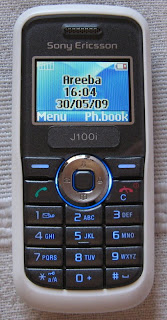 It wasn't worth getting a contract, even though they're as little as about one euro per month for low usage, so I opted for a pay-as-you go Sim Card. There were only two mobile phone providers in Cyprus, and we decided, for no particular reason, to opt for Areeba rather than CYTA. I had, as far as I remember, a five pound (in old Cyprus money) card initially, and they told me that my first top-up would be worth twice as much as I paid for it. So I also bought an eight pound top-up card, worth sixteen pounds with the doubling, for a total of twenty-one pounds of credit.

Since I only used the phone about once a month, and phone calls are very cheap in Cyprus, I still had about twenty pounds of credit by the end of 2007 when Cyprus joined the Euro-zone. So it transferred itself to about thirty-four euros.

By the end of April, I started receiving text messages reminding me that my credit would expire unless I bought another top-up card, since they only last a year. I still had about thirty-two euros of credit, so I didn't want to lose that.

I was slightly confused that I could not find Areeba cards advertised anywhere, until someone kindly explained that they are now under MTN.

So I bought a five euro MTN card, the smallest available, and topped up my phone. Unfortunately, I hadn't realised that a five euro topup only lasts 30 days, so around the end of May I started getting more messages... and had to buy a ten euro card to extend my credit by another year. So by the end of May 2008, I had about 47 euros on my phone.

During the rest of 2008, I did use the phone significantly more. When I was in the UK, I sent texts to Richard. When we returned to Cyprus, I sent texts to Tim in the UK. And when Richard travelled to Australia earlier this year, we had several text conversations, all of which cost a great deal more than the Cyprus texts that are just two or three cents each.

And about a week ago, I had a text message on my phone informing me that I needed to buy another top-up card, or I would lose my credit... which stood at €29. My goodness... I had actually used €18 worth of calls and texts in a year.

So, a couple of days ago, I popped into a local periptero and shelled out another ten euros for another top-up card: 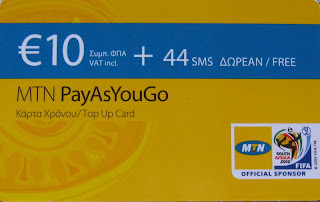 Apparently I get 44 free text messages with this.

In a little lightbulb moment, it occurred to me that when I phone Richard's mobile to remind him to come home for a meal, it would be better to use my mobile to call rather than the house phone. The cost won't be any different, and I might as well try and see if I can use up at least half of my outstanding phone credit...
Posted by Sue at 16:15

This blog sounds just like me! I have an orange payg sim, and if I top up with £10 I get 300 free texts, and free facebook mobile ( and I have found out I can check my yahoo mail.. but they don't tell you that) I always use about 200- 220 texts each month, which would cost £22 SO it makes sense to top up with the £10, but because I hardly ever use my phone for calls, I now have £73 credit!The credit is worth much more than the phone :-D
Like you, I have been using the phone much more often just to use the credit :-D
Love to you all
Paula ( Fb friend ;-p )

Here calls to people with the same service provider are cheaper than those to other providers to to landlike phones, so I usually call mobile to mobile, landline to landline.

Probably the most expensive item is sending photos back to my computer -- cell phone photos are quite adequate for blogs. Oh, and Twitter,, because those are sent via SMS to the UK.