I've always enjoyed board games. Well, some of them. I can't say I'm a huge fan of Monopoly. Or games of pure luck such as Ludo or Snakes and Ladders. Nor do I really enjoy two-player thinking games like Chess or Mastermind, although I used to play them from time to time. I was even in charge of the Chess Club at my high school for a while, MANY years ago, though I'm not entirely sure how that happened.

I used to play board games with my siblings, and then when we had children of our own we played games with them, too. The word game Probe was popular for a while; in their later teens we played Mah-jong from time to time, and Rummikub fairly often. One year we had an ongoing Rummikub tournament to see if one of us really was the best player, or if it evened out over time. (In case you are interested, it was Daniel. Without any shadow of doubt. I still have the score sheets! In 2002, we played forty games in total. Daniel was first, with 633 points. I was in second place, with minus 74...)

Now our boys are grown up and have left home, you might think we play fewer board games. This is far from so. We have learned some new games in recent years (Settlers of Catan being a current favourite) and we have also found some Scrabble-playing enthusiasts. This in addition to playing extensive games of both Scrabble and Lexulous on Facebook with various people.

On Friday evening, our friends Mark and Joan (from the USA) came over for a meal and a couple of games. Joan also plays on Facebook, but our husbands don't. While there is, evidently, some luck in the tile distribution, there's also a great deal of skill in word placement. We play in a fairly co-operative kind of way, with a full two-letter word list printed out for all to access, and allowing each other to look up words before playing them in the Official Scrabble Words book. We also sometimes point out better placements to each other, if someone could make a much better move, and then allow them.

Online, it's quite common to score 'bingos' - the Facebook word used for using up all seven tiles in one move. But then on Facebook we have plenty of time. Sometimes I only make one move in a day. Not that I spend the rest of the day thinking about it.. but there's no time pressure. Playing 'live' is more difficult, even though we don't enforce any time limits as such. By the last round of the game, there had not been any seven-letter words. I had the word 'polite' in my hand, plus an N. I noticed a U and wondered whether UNPOLITE was a word. I didn't suppose it was (the reverse of 'polite', after all, is 'impolite'. But I looked it up anyway. To my surprise, it existed. Even more surprising, nobody took the space I wanted to use.

So I played a 'bingo' and also ended the game, as there were no tiles left, with UNPOLITE. And then took a photo since I don't think I can ever remember finishing the game with a bingo: 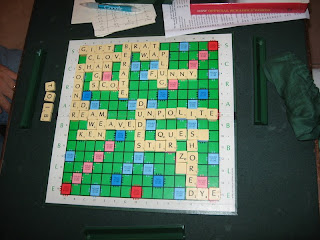 Since nobody exepcted me to go out, there were a few high-scoring tiles in hands, too, which counted against them.

Then we played another game, and Tessie decided to advise Mark on his moves: 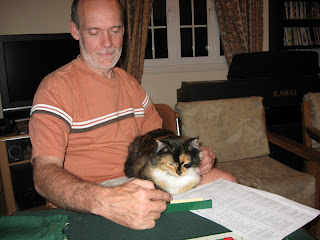 It seemed to be successful, since he achieved his ambition of scoring 100. I was lucky enough to have another bingo: 'SMOKILY'. And then we had quite a discussion on how on earth one would use that word in a sentence. Other than something like 'I scored a bingo by playing the word "smokily" ' of course. Perhaps, 'He emerged smokily from the blazing room'?

I won that game, too, thanks to the bingo (using all seven letters in one turn gives a bonus of fifty). Joan decided I had scored an A grade, and then set to work to figure out how everyone else would be graded, if using the American system of percentages. It got very complicated, so Richard pulled out the calculator on his phone to enable exact calculations... 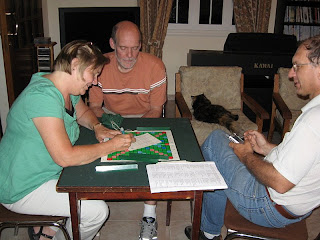 Yes, we still have the kinds of bizarre discussions we used to have with other home educating families when there were teenagers at home...
Posted by Sue at 15:59