In praise of the Cyprus froutaria

When we first moved to cyprus, nearly twelve years ago, we did almost all our food shopping at a supermarket (Metro). We bought bread at a bakery (Perseus), but although I knew there were some 'froutaria' shops (roughly equivalent to UK greengrocers, selling fresh fruit and vegetables) there weren't any particularly close to where we lived.

Then we moved. Within easy walking distance are two froutaria shops. At first, I went to one that's about two minutes walk away. These little shops tend to sell other groceries too, so they're a quick place to pop to for milk, or butter, or anything else we might run out of between supermarket shops.

But I was never entirely comfortable with the fact that people smoked in the shop. Besides, the prices - and quality - seemed no better than the fruit and vegetable section in Metro. So I didn't go there very often.

It took about a year before I tried the Froutaria Achna, which is five minutes' walk from our house. It took me about five minutes to be convinced. It's an excellent shop, with a wide variety of seasonal fruit and vegetables, at good prices. Better still, as with most of these little froutarias, there's always a row of produce at greatly reduced price. I go there usually twice a week now.

I always look in the reduced section first. Until about a year ago, it was outside; then they remodelled the shop, so it's now inside, meaning that it keeps better as it's out of the sun. The plastic bags for selecting produce are colour-coded: green for the main section of the shop, pink for the reduced section. There are also extra-reduced bags, already packed, in clear plastic bags, at one euro each.

Yesterday morning I walked there at about 7.20am, before the heat of the day. I wanted a few oranges, a few tomatoes, and perhaps some cucumbers.

I saw a one-euro bag of carrots that looked very good quality. We can always use carrots....

Then I saw some nice looking french beans, in the reduced section. I knew I could freeze them....

Then I saw some peaches that looked extremely good, also in the reduced section....

... I was limited only by what I thought I could carry home. This is the problem with visiting a Froutaria: I always buy more than I intend to, because the fruit and vegetables look so good.

This is what I bought: 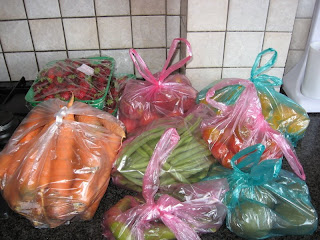 That's 2kg strawberries, about 3kg carrots, around half a kilogram of vine tomatoes, about 1kg french beans, about a third of a kilogram of cucumbers, six oranges, sixteen peaches, and six kiwi fruit.

The cost? Just over eleven euros. The only things not in the reduced section were the oranges and the kiwis. I don't know how this compares to other countries, but it seems pretty good value to me.

The mains water was on yesterday, so at about 10.15 I decided I'd better sort out the fridge and freeze some of the vegetables. I'd bought a bag of reduced bell peppers at Metro the day before, and also some mushrooms. I knew I wouldn't use them this week and they won't keep that long.

So I washed, cut, blanched and froze all the french beans. I did the same (without blanching) for the mushrooms and the peppers. I sorted through the strawberries; a few were too squashy to use, but at 99c per kilogram, I can hardly complain. I decided to make a large fruit salad with some of the peaches, and the better strawberries, and a couple of oranges and kiwis, and a can of pineapple, since we were expecting several guests for our evening meal. Then I froze some of the slightly squashy strawberries to use in smoothies.

I did take a half-hour break, about noon, to sit down and read, since my back was starting to ache. And I took a quarter-hour break for lunch. But with that, and also preparing potatoes and ice cream and one or two other things for the evening, I didn't even get in the shower until nearly 4pm. It always surprises me how long it takes to do simple jobs like freezing vegetables. Probably more so in the summer when I tend to work more slowly, although I did put the air conditioning on in the kitchen for a couple of hours.

I'm glad I did it, though. I love fruit salad, and there's half a bowl left for me to eat this week. I'm also very pleased to have portion-sized bags of beans, peppers and mushrooms, which will make them so much quicker to use when I want some to go in (or with) our meals.
Posted by Sue at 17:04

We love bargains too - makes shopping much more enjoyable and encourages you to try things you might not otherwise. Can't comment on your prices as I shop/think in lbs and £s but, given your previous post, it's such a shame to see so many plastic bags. Our market weighs into paper bags or you can put larger items directly into your basket and even using a supermarket doesn't mean everything is in individual plastic as you show. Can you 'start the revolution' and change the Cyprus habits?

Not much we can do about the plastic bags, since they're colour-coded to show which aisle (reduced or otherwise) we chose the produce from. We have to take them all to the checkout to be weighed. Larger items can go in the basket directly (eg the strawberries.. I didn't get an extra bag for them) although if we don't watch carefully they then get bagged at the checkout. And I do take my canvas bag(s) to carry them home. The bakeries do paper bags, but nowhere else does.

We do keep most of the little fruit bags and then use them for removing waste from the cat litter, since they are airtight. So they are, at least, re-used.

We stopped off at a big open greengrocers on the main road from Nicosia to Larnaca. Fantastic selection and very cheap. Standing outside and watching the Greek drivers try not to crash into each other was an experience as well.

Have you ever tried the Greek speciality roasted Acorns?