Out of Cyprus, days four and five

On Sunday morning, Richard was due to have a short interview at St Stephen's, Selly Park, which is one of our long-term and generous supporting churches. We used to attend services there regularly, when we were first married, up to the time when we went to the USA in 1992.

The day was sunny, yet again, and although some of the trees have grown a little over the years, the building looks the same as it ever did: 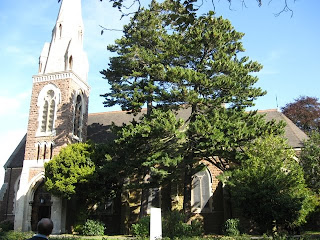 The sunlight glinting through the trees on the nearby streets was stunning; no doubt someone with an expensive camera and fancy lenses could have captured it properly. I just snapped mine anyway, to remind me: 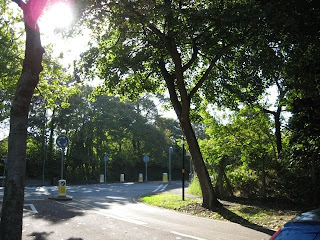 The interview was really to remind people of our existence, to let newcomers know what Richard does, and to give a few pointers for prayer. Afterwards we chatted with a few of our old friends, then went back to Moseley for a Sunday roast cooked by Tim.

In the evening, Richard did a similar interview at St Wulstan's Church, but I decided to go to Christ Church with Tim, as he was playing the piano. Afterwards there were a couple of presentations from people who had been to Malawi recently. Richard came to join us when he'd finished, and we caught up with yet more friends.

On Monday afternoon I took this photo of Tim, just because he was there, lounging on the bed, and because we'll soon have to say goodbye again: In the evening we were invited to a meal with our good friends John and Heather. Their oldest son was married in the summer, and is now living in Iona; their younger son recently started university. That makes me feel old - we knew them before any of us had any children. But their daughter is now at home again, embarking on a new course soon: 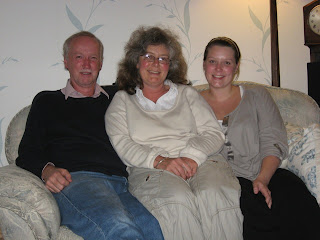 They have a very comfortable gliding chair, which Tim and I both sat on for a while... Tim for longer than me: 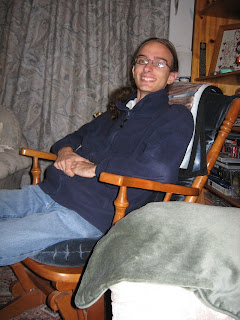