The end of Summer in Cyprus

It's strange how quickly the weather changes between the seasons in Cyprus. A week ago, it was still hot and somewhat humid. Richard and I both caught some kind of 24-hour stomach bug over the weekend, which wasn't very pleasant. Mine started with feeling very shivery on the Friday night; I could hardly stop my teeth chattering, and was convinced it was getting chillier already. But the thermometer on the kitchen scales read 26C even at 8pm, and Richard assured me it was still warm. He's the one who usually wants a sweatshirt and other warm clothes long before I do.

The weekend stayed warm, too. And Monday. On Monday afternoon I took three small children for a walk in the Salt Lake Park, since their parents were both ill; one with something like we had, and one with a flu bug like the one I had a fortnight previously. It was about 4pm when we went out, and sunny. Perhaps a little less humid, but certainly not at all chilly.

Tuesday morning I walked to Tots with the same three children, as their parents were still not well. We went somewhat slower than I usually would, but still I was very warm by the time I got home.

Then, within the space of about half an hour, the sky changed from glorious blue to this: 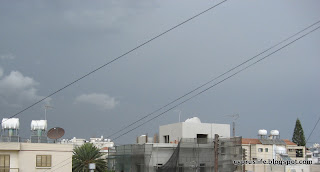 Richard was on his way back from Nicosia, and phoned to say that it was hailing: the fields were all white. By the time he arrived home, it started raining here. For fifteen minutes, it poured down. Then, as usual in Cyprus, it stopped and the sun came out again. At first it felt quite humid, as the rain evaporated, but that eased, and by the evening, there was a wonderfully refreshing breeze.

Tuesday night we almost felt chilly. So on Wednesday, when I changed the sheets, I found our thin (4.5tog) duvet and put it in a cover. I thought it might be too warm, but it was wonderful. It rained more in the afternoon.

On Thursday, rather than getting dressed in shorts and flip-flops, I got dressed in jeans and trainers. I didn't feel too warm at all. It rained again. And on Friday. And Saturday. And today. As I type, I can hear thunder rumbling around the hills, and hear a patter of rain outside. It's gentle rain, exactly what we need, and I'm enjoying it. Today I've been wearing a light fleece. The temperature must have dropped ten degrees or more in the past week.

The only people I feel sorry for are the families who came out from the UK for their half-term break, hoping for warmth and sunshine.
Posted by Sue at 19:14

Thunder also rumbling around the hills here in Episkopi, not sure about the fleece though, I'm still in shorts and getting bored of them!