Yesterday afternoon, on the way back from visiting friends, Richard remembered that he had left something lying around on or near King Malu.

Who is King Malu?

You might be a little confused if I were to tell you that King Malu is a 'she'. And she is a very important part of Richard's life right now. When he's not at work, he spends a great deal of time with her.

He wrote about her on his sailing blog a couple of weeks ago - yes, she is a boat. A small yacht, bought by his sailing friend, who then generously donated a part of her to Richard.

She has sailed around the world, although it's unlikely that she will do so again. She hasn't even been in the water for some years, and needs a good amount of repair and maintenance. She's currently sitting on the shore at Larnaka Marina, along with many other boats. They hope to have her in the water by the end of the year, and ready to sail by the start of the season next March or April. So Saturdays and public holidays and other odd hours are being spent working on her.

I took a photo, with Richard in it, to give an idea of King Malu's size: 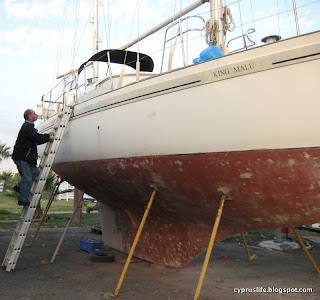 She's significantly bigger than Galini, the Wayfarer dinghy that Richard owns and has been sailing for the past couple of years: 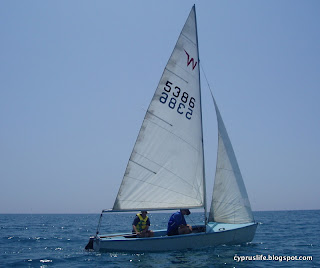 On the other hand, she is considerably smaller than the MV Doulos, the ship where Daniel is still working: 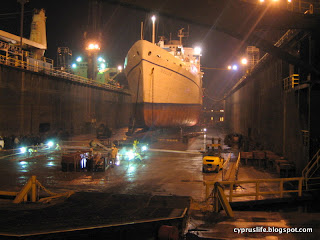 Co-incidentally, the Doulos is also in dry-dock, for several weeks. As she was in that picture, which I took when we visited her in Singapore two years ago.

Back to King Malu: this photo shows how close she is to the water in Larnaka marina: 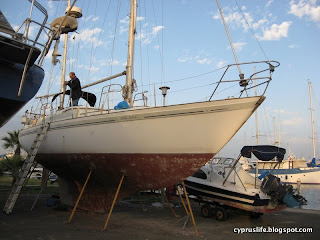 Then I even climbed up the ladder to see the top. I don't like ladders or heights, and I didn't go inside to see the cabins, but Richard opened the hatch so I could see a little. He hopes that I might go out with them some day, since there will be a good sun-shade on the top, and the cabins for even more sun protection. I'm not particularly keen on boats, but maybe one day...
Posted by Sue at 14:42