Gradually, over the years, we've cut down on the amount of pre-processed food we buy. In the UK it's so easy to buy things packaged - often quite good quality, and a good price -that it can be easy to eat a reasonably balanced diet without doing any cooking from scratch.

In Cyprus, however, people - at least, the older people - cook in a far more healthful way, using slow-baked meats, and salads; lots of olive oil, and plenty of fresh fruit and vegetables. Oh, they also like their honey-laden butter-filled pastries, and their ultra-strong Cyprus coffees, and their brandy. And, even in the twelve years we've been here, we've noticed a significant increase in the amount of processed food available. We now see 'Iceland' brand pies, and nuggets, and quite a selection of ready-meals in the freezers at Metro, and a huge variety of the ubiquitous frozen pizza.

But imported foods are pretty expensive. And I've become increasingly aware of the importance of eating food that's as fresh and unprocessed as possible. Cooking from scratch means that I know exactly what goes into what we eat, and avoids the quantities of additives which go into jarred and even some frozen foods. I know some of the additives are put in for good reasons: to keep food from going bad - but surely it's better to eat fresher food before it has the opportunity to go off.

So I use my slow-cooker quite a bit, and then freeze leftovers which gives us our own 'ready meals' - several portions at a time, since it's a large slow cooker and there are only two of us here most of the time - and I buy a lot of fresh fruit and vegetables at the local Froutaria. Many of them are grown in Cyprus, or nearby countries; mostly they're not organic, but at least the carbon footprint isn't too high. Moreover, they don't tend to keep for long, which suggests they haven't been treated with too many nasties. Citrus fruits grow here, and even when they're imported ones, during the summer, I've never seen any treated with wax as they are in the UK.

All of which is a rambling introduction to today's post. In the past year or so, we've started using mango chutney as a side dish with curry. We eat curry at least once a week, sometimes twice; turmeric appears to have countless health benefits. Besides which, we like curries. I have a few good slow cooker recipes so there are usually several portions in the freezer.

Unfortunately, mango chutney comes in fairly small jars, at a rather high price. But it took me until this week to realise that it's something I could easily make, since we get fresh mangoes in Cyprus at this time of year. It's not a fruit I would normally buy, but I looked at them a couple of times in the Froutaria recently.

I searched online, and of course there were dozens of recipes listed. Some simple, some complex. Some highly recommended, some not. How to choose?

In the end it was easy. I turned to my copy of the new 'Good Housekeeping' cookery book, and found a straightforward recipe in the preserves section. Oddly enough, the only ingredient I couldn't find easily in the local shops was malt vinegar; everywhere - even the Froutaria - sells wine vinegar, but I didn't want to substitute since the recipe said malt. We had some, but not enough, and I forgot to get any more in Metro in Friday. I found it, eventually, in Tesco Express, at rather a higher price than I'd hoped to pay.

So yesterday, while my Christmas cake was baking, I made mango chutney. I got in a bit of a mess cutting up the mangoes, which are not particularly easy fruit to get into. Or maybe I wasn't going about it in the right way. It simmered for an hour and a half, and made five and a half jars: 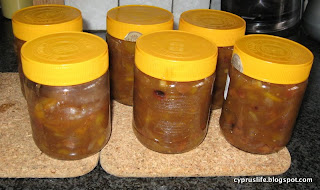 We tried it in the evening with our Saturday curry, and both thought it a success. Not as sweet as the mango chutney we can buy, but actually rather nicer. So, that's one more ready-made product I won't need to buy any more. At least, not until we have finished this batch. I'm not sure how long mangoes are in season.

However, I must remember not to make it at the same time as Christmas cake. I was just beginning to enjoy the gentle aroma of spice emanating from the oven when it was overtaken by the much stronger and rather vinegary smell of the chutney.
Posted by Sue at 14:01

Sounds good. Given I found the pre-packaged almost inedibly sweet compared to the delicious Singapore one that we had, I'm hoping to try some of yours...

Cutting mangoes reminds me of when we were in Rio. I struggled too until a friend explained the best way (in her opinion): Make the first cut slightly off centre. Your knife should just skim down the side of the large stone. The second cut is similar, only to the other side of the stone. This leaves a ring of flesh around the stone, which I aways pealed off the skin and then used the knife at a slight angle to cut away quite a lot of fruit remaining around the stone. For the two (almost halves) of mango, you then cut a crosswork array of slits into flesh and turn it inside out. This makes wonderful 'hedgehogs' which look stunning in a display of fresh fruit salad, or the small squares can be easily sliced now off the flesh.
Mmmmmmmmm makes me long for a mango. Sadly there are no longer any tropical fruits and few citrus fruits here in Kiev. We're back to apples, pears and imported bananas!
Hope this is useful for the future.