This year, prompted by various online friends, I determined to get it done this week. However Richard was away, and I couldn't find glacé cherries in any of the local shops. I kicked myself for using up the spare tub I bought a year ago on the cupcakes for Richard's birthday, just a few weeks ago. Even though we enjoyed them.

I was even more annoyed when we did our monthly big shop in Metro yesterday, only to discover that there were no glacé cherries there either. I was able to buy tubs of mixed peel, and already had everything else I needed. But, thankfully, we had to go to Orphanides - the big one - for something else , so I looked in the food section, even though I'm really not a fan of Orphanides, and yes! There were glacé cherries! Four tubs... so, once again, I bought two.

Last night I was about to go to bed when I thought about the Christmas cake. Delia's recipe requires that all the dried fruit be soaked overnight in three tablespoons of brandy. So I weighed it all out, cut up the cherries, and left it to soak: 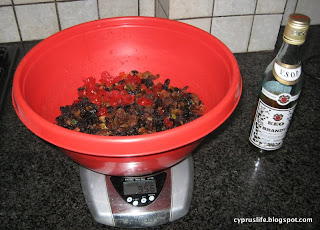 When Richard had gone out this morning, I did the rest, and even remembered to put the oven on regular setting rather than the fan oven. It was perfect. It really did take four and a half hours. And here's the obligatory photo of a cake that looks pretty much identical to the ones I made the last two years: 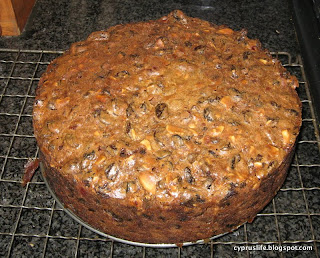 It's now cool, so I've wrapped it in foil and put it in a cake tin. I shall 'feed' it with a little more brandy over the next few weeks, at random intervals when I remember, and put on marzipan and icing in the week before Christmas.

So that's one thing done. I know some people who have bought all their gifts, and organised all their Christmas food already. I prefer to leave it a little later in the year...
Posted by Sue at 17:27

Looks great again Sue. Your fruit is all cake-covered too whereas mine has some bits sitting proud, annoying when you come to ice.