It's strange. I can remember making rhubarb chutney many years ago, when we lived in the UK and had gluts of rhubarb every year. Richard quite liked it, I was less certain. It always seemed like a worthy thing to do: one can only make so many batches of rhubarb fools and pies, and Richard isn't a fan of crumbles...

But the the rhubarb chutney used to get forgotten in the back of cupboards. And we ended up throwing some away that got very old, and not very pleasant. Perhaps I made the mistake of putting it in jars with metal lids. I don't really remember.

Anyway, it had been a LONG time since I made any chutney. It's only in the last year or two that I realised it's something I do actually like very much, either with curries or with bread and cheese. It took me until last week to discover that it was actually much easier than I had remembered. Certainly simpler than making jam, since it doesn't have to reach an extremely high temperature. Nor does it have to be watched continually. It just simmers gently until it's thick enough - about an hour and a half. No chance of it boiling over, if made in a large preserving pan.

So last week, as already described, I made some mango chutney. It was so good that when I saw some inexpensive ripe tomatoes in our local Froutaria, I bought them and started hunting for tomato chutney recipes. Ideally one with apples too, since I'd bought a large bag for a euro. The choice was a bit much, but gradually I realised that chutneys have an overall theme: fruit, dried fruit, sugar, vinegar, and a few spices.
So I finally took one fairly simple recipe, removed the parts that seemed complicated (mustard seed in a muslin bag, and blanching/skinning the tomatoes first), and used white wine vinegar since it's much easier to find than malt vinegar in Cyprus. Oh, and I increased the number of garlic cloves from one to five, since one can never have too much garlic, in my opinion. The apple and tomato chutney recipe I came up with is now on my recipes blog.

It didn't look or smell terribly appetising as it started cooking: pieces of apple and tomato floating in vinegar, giving off rather a pungent aroma: 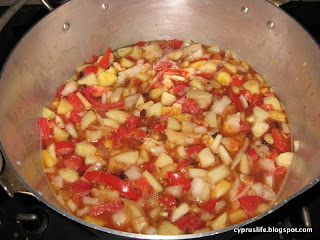 But, by the magic of chutney recipes, over about an hour and three-quarters it transformed into this rather nice-looking thick mixture: 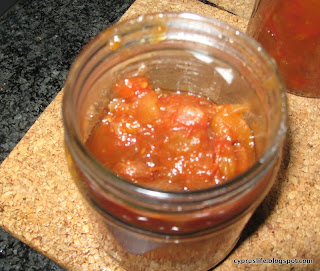 If I'd used malt vinegar, it would have been browner; but I rather like the orange-red appearance: 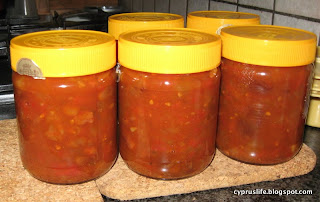 I tried some today with toast and cheese, and it was extremely good!
Posted by Sue at 17:23