Frustrations and worries in Cyprus and elsewhere

It was a mixed kind of day, yesterday. For one thing, I kept thinking it was Friday, though I've no idea why.

Late morning, I had an email from Daniel, letting me know that after an inspection, towards the end of their major, and quite lengthy dry-dock in Singapore, the end is finally drawing near for the MV Doulos. Major steel replacement is required in order to meet next year's new and more stringent regulations, and the cost would be several million euros. It would take a few months to do, and even then the ship would not be able to sail beyond September 2010. Decidedly not worth doing, although it was a difficult decision to make. And although he seemed pretty certain this was definite, it wasn't quite 'official'... so we couldn't let anyone know.

Naturally, my mind was churning. What would he do next? Will he come directly to Cyprus in January, or do something else until returning - at the end of his commitment - in April? What will happen to the other 300 or so volunteers on the ship, some of whom only joined a couple of months ago, expecting to stay for two years?

(Today it all seems to be official. I saw an update about it on Facebook. Letters are being sent to important people in the organisation, and information to supporters. There's a thread about it on the shipspotting forum, and it's been announced officially on the main page of the MV Doulos website. I gather morale is pretty good on the ship, but some people, naturally, are very upset at the potential closing down of this elderly ship.)

Back to yesterday: I chatted a while online with Tim, who was pondering which of several options he should choose for his next essay. It led me to checking several websites as he mentioned various philosophers. He was feeling frustrated, because some of the academic journals that his course tutors recommended for the essay that appealed to him most were unavailable online, and nowhere in print in any of the Birmingham libraries.

Meanwhile, my many home educating friends in the UK are feeling threatened and very worried about proposed government regulations. These - in a nutshell - comprise compulsory registration, annually (a time-wasting money-wasting exercise at best) and all kinds of restrictions and requirements for home educators, including regular inspections. They completely miss the point that children educated at home are motivated to learn without curriculum, timetable or planned 'lessons'.

On a lesser - but still frustrating - note, I've been getting a bit behind with uploading photos both to Facebook (for friends to see) and Kodak Gallery (where I can order prints). I organised the November ones for Facebook - that was fine. I have a direct plug-in from Picasa, which makes it easy. But when I tried uploading to Kodak Gallery, the java uploading mechanism didn't even appear. Nor was there the usual link to 'easy upload' which is all I've been able to use since having this mac computer. I'm using Safari as my browser now, since Firefox was so slow after recent updates. But when I tried Firefox, wondering if it was a Safari problem, it didn't work either.

I sent Kodak a report on the problem, and had an auto-reply, but nothing more. So I can't upload photos, which means I can't easily order them. Getting prints made in Cyprus costs considerably more and isn't as good quality.

In the evening, we went to play another game of Settlers of Catan with some local friends. That was good. It was a close game, but Richard won eventually. So I took a photo: 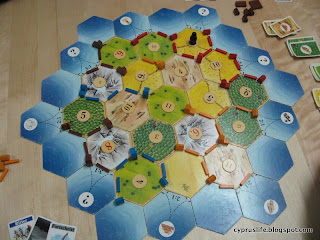 It's possible that I shall be going to Germany for a week, with our friend and her 14-month old daughter. Our friend hopes to attend a conference, and the toddler is too small to leave with her father and siblings, but too big to be quiet in a conference. So I'll be her 'nanny' for a week. It could be fun, and certainly different. However, our friend is having trouble with Cypriot bureaucracy, and still doesn't have her residency agreed. Until it happens, she doesn't want to leave Cyprus, in case she's not allowed back again, since she isn't a European. And the conference starts in about ten days, so time is running out. It's a bit unsettling not knowing whether or not I shall be going.

Then, with my fourteen month old friend sitting on my lap, I received a sudden blow to the side of my forehead. It was a hard plastic cup, which she thrust upwards unexpectedly, and was surprisingly painful.

We got home about 10.15pm, and I was tired. But my mind was churning - mostly thinking about Daniel and the Doulos - and the side of my face hurt when I lay on it. I usually get to sleep within about five minutes, but I lay awake for at least an hour.

And yes, I know that in the scheme of worldwide suffering, none of these worries is really significant.

I've chatted online with Daniel today for quite some time, and he seems quite upbeat about the future. I hope I sleep better tonight.
Posted by Sue at 20:12