Switching on the central heating

A couple of weeks ago, I wrote about the gas man arriving and deliving the first bottled gas of the season. He obviously recognised that we would be thinking about central heating before too long.

However, it stayed relatively warm until a few days ago. It's only in the last couple of days that I've started wearing a sweatshirt all day, rather than just in the evenings. Even as recently as Tuesday morning I spent the morning without one, when I walked to Tots. But by Tuesday evening, I was beginning to feel distinctly chilly. So Richard decided, as he had some free time, that he would service the central heating.

The boiler is in a little shed at the back of the house: 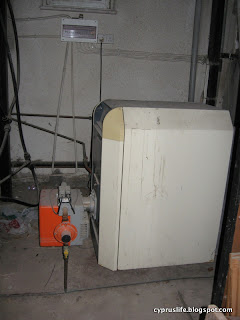 It's pretty dusty in there, and the pipes look a bit of a muddle, but it works. Basically it just needs cleaning out at the start of the season. It didn't take too long this year. About fifteen minutes in all. Richard switched the heating on, and the radiators sprung into life. We have several of these - looking much like British radiators - in various spots around the house and guest flat: 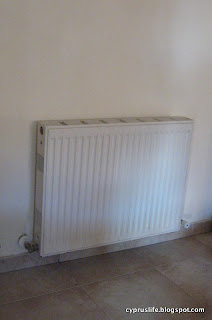 Actually there are more than we need. So we keep some of them permanently switched off. We don't even run the heating very warm: about 17C is plenty, just to keep the chill off the house during mornings and evenings.

I have to admit I don't notice it much in the evenings. Today was quite warm again, and the house isn't cold. But I do like having the heating come on around 6.30am when I get up.