After much reflection, I think I prefer 'twenty-ten' to 'two thousand and ten'. It has something of a ring to it, and - more importantly - is shorter. And I refuse to get involved at all in the controversy about whether 2010 (however pronounced) is in fact the first or the last year of a decade. I'm happy for it to be both, at the same time.

December seems to have raced past, although, at the same time, it seems quite a long time since Tim came back to spend just over a fortnight with us. The time since Christmas certainly vanished, and yesterday was our last day together until - probably - April. I never like goodbyes, although I don't find them as painful as I did the first time we left him in the UK, and returned to our empty nest. Well, empty of offspring. The three cats are still very much part of our lives.

Indeed, the cats have begun to get used to having to share a human, from time to time. Yesterday afternoon, Cleo was on my lap and Sophia decided she wanted to be on me too. So she climbed onto my shoulder. It was a bit of a squash, but quite amicable. 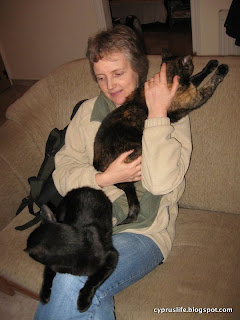 Then Tim sat down, and I realised we hadn't taken many photos of him over Christmas, other than in the Settlers games which I'm writing about elsewhere now. So Richard took one. 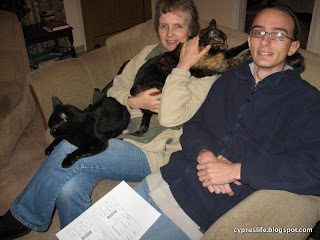 After we'd eaten in the evening, we played a third game of Seafares of Catan (one of our Settlers expansions) just to reinforce the game in our minds, and finished by about 9pm. Tim then went to finish his packing, and we all set our phone alarms for 2.30am. I said goodbye to him anyway; I am NOT good with disturbed or late nights, and didn't know if I'd wake at all. I asked if he'd like me to go to the airport, and he said yes, of course he would, but he didn't want me to feel rotten the following day, so totally understood if I didn't go.

I really didn't want to get up at 2.30. I could easily have gone to sleep again, particularly as I woke two hours earlier after a vivid dream in which none of our alarms worked, and Tim missed his flight! Thankfully they did all work, and after five minutes when I nearly did fall asleep, I crawled out of bed and put some clothes on. Tim was pleased, so I'm glad I went.

The new airport at Larnaka is much more impressive than the old one. It looks, as one friend remarked, like a 'proper' airport. I suppose it was silly to try and take a photo in the middle of the night, but I did anyway: 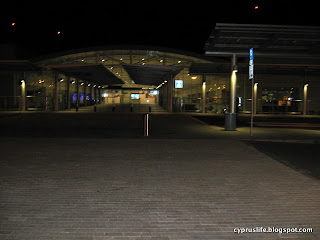 And then, as is traditional for us, I took one of Tim and Richard with the luggage, on their way in: 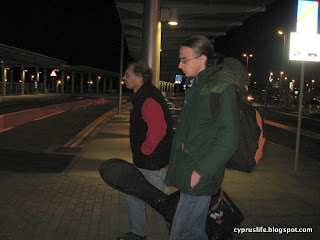 He had checked in online so only had to leave his main luggage - 16.7kg so well under the limit. He had chosen to fly with Cyprus Air, since they're more flexible than the cheaper airlines about hand luggage, and - as you can perhaps see in that photo - he really wanted to take his bass guitar back to the UK with him. It only has a soft case, so he couldn't check it in. Flying on New Year's Eve gave him a very good price, no more than the cheaper airlines anyway. And as it turned out, it was an excellent choice of flight, because the plane was almost empty, and he was next to three empty seats... which gave him plenty of room to stretch out and have three or four hours of sleep.

He got in touch when he landed, and again when he was on the train back to Birmingham. Daniel and Becky were also en route there at the time, so I hope they've all met up, and got to know each other a bit. None of them has been online so I assume all is well.

As for me.. we did get back to bed about 4am, but I then stayed half awake until Tim sent his promised text message to say that he'd had no problems getting the bass guitar to the gate, in addition to his backpack. I suppose that was about 4.15. I then slept soundly for about three hours, and was woken by Sophia.

I tried to rest this afternoon but couldn't get to sleep. I don't do at all well on broken nights. I probably had six hours of sleep last night, which is more than many people get, but without at least seven (unbroken) I do feel excessively tired the following day. I don't think I've done anything constructive today. We're invited to a small gathering this evening with a few friends, and have said we'll go for an hour. I don't think there's any way I could stay awake till midnight tonight. I find it difficult enough at the best of times.

So, as we're going out in half an hour or so, and will then collapse into bed afterwards, I'll take this opportunity to wish anyone who reads this a very happy New Year, and every blessing for 2010. However you decide to say it.
Posted by Sue at 19:15

Happy New Year to you also, Sue and Richard.

We've heard little but "twenty-ten" for the last six years, because of the World Cup. But it undoubtedly followed "two-thousand and nine".

The first decade of the 20th century was easy - it was the Edwardian Age. And the one that followed it was the Great War -- I hope we don't have that.

Happy New Year to you and Richard, Sue. Thank you for your blogging.