Larnaka has felt quite bereft of people recently. So many of them go home - or away - during or just after Christmas.

So we were very pleased that Mark and Joan returned from their holiday in Europe Monday morning, and came for a meal with us in the evening.

They brought with them a new game for us, one we'd never even heard of, called 'Ticket to Ride: Europe'. So after we'd eaten, we suggested they teach us how to play.

It turned out that they'd never played it either. Their daughter recommended it to them - and brought it from the USA - but, they said, it was supposed to be quite easy to learn. I usually prefer to learn games from other people, but we decided to try it out anyway, following instructions.

I read aloud, and we set the game up. The main board is an approximation of the map of Europe, supposedly from about 100 years ago in the early days of train travel. Some of the cities are placed rather erratically (according to Richard - my geography is not good enough to know) and Cyprus is missing entirely. But then it's a game, not a geography lesson! There are little plastic train pieces in five colours, little stations, and a selection of cards which rather confused us at first.

As we got started, we began to realise that there's a lot of potential in this game. The idea is to collect train cards and then claim routes between cities, using the appropriate coloured cards, and then placing little trains. The longer the route, the higher the score. There are little wooden scoring markers that travel around the side of the board, keeping track.

In addition, there are journey cards picked up randomly, which list two cities each. Some short journeys, worth 6 or 7 points, some much longer, worth 20 or 21. We were supposed to discard any we didn't want, but since we weren't at all sure at the start of the game what we might want, we decided to keep them all while we got used to playing. We gradually realised that we were supposed to build complete routes that travelled between these destinations, for extra points at the end of the game.

My cards were similar: two of the journeys overlapped completely, which I was easily able to complete. I also had one from Frankfurt going south, but my 'longer' route card covered many of the same stations as my two overlapping shorter ones. It meant that I - somehow - managed to complete all my routes in the first hour, so on my next turn I picked up three more cards (as permitted, if one wishes) and then kept one which was, again, very similar.

The game ends after one player is down to two or less plastic trains. That happened to Richard. By that stage our wooden markers were all fairly close to each other, although I think mine (yellow) was slightly ahead. But when we'd added on the extra points due to completing journeys according to our cards, I was WAY ahead. 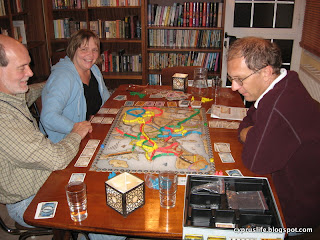 We could see that there are some interesting strategies to this game, which we didn't begin to explore... so will definitely have to play it a few more times in the near future.

Here's the final board itself: 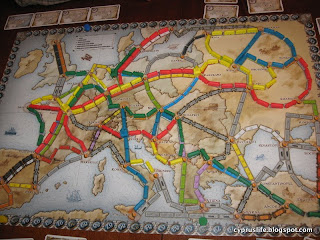 Richard had the red trains, Joan was green (and won an extra 10 points for the 'longest route'), Mark was blue - and didn't complete any of his journeys. If we had subtracted points for unfinished journeys, he would have been in negative points! However since none of us is particularly competitive, and the enjoyment of the game is in the playing and conversation, it didn't particularly matter who had won.
Posted by Sue at 15:47

This is my favorite of the Ticket to Ride games. :-) My parents have Europe and U.S., and friends of ours in Germany (with whom we had a games evening every first Friday of the month for four or five years) have something like five versions. (Those two plus 1910, different routes played on the U.S. board; Germany, which has passengers and I find too complicated; and Switzerland, which is okay, but Europe is still my favorite.)

We got back from Southern CA about 45 minutes ago and Jörn is making dinner. AOL won't let me in, so I caught up on your blog instead. :-)