Cats in the study

I don't seem to have written much about our cats recently. But they're all still doing well, despite their advancing years. If there are approximately six cat years to one human year, Cleo is now approaching 70, Sophia's around 65 and Tessie's around 55. You wouldn't guess from the way they still leap around up and down stairs, and over neighbouring rooftops.

But they do sleep more than they used to. In the Summer, they prefer bookcases and cool tiled floors, but now winter's here, albeit relatively mild, they prefer warmer surfaces. Cleo often spends most of the day curled up on our bed, chasing patches of sunshine, although Sophia is usually in whatever room I happen to be in. Tessie mostly sleeps on her favourite chair in the living room.

But just occasionally they all appear in the same room at the same time. Sometimes that's because there's a good smell from the kitchen, but a couple of days ago they just - apparently - wanted to be sociable. I went into my study, and there they all were: 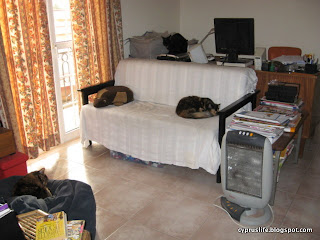 Sophia was on her usual favourite spot in the beanbag: 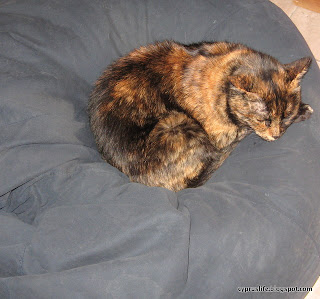 Tessie was curled up in comfort on the sofa: 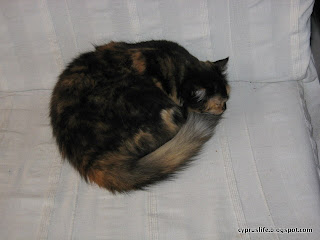 While Cleo, who sometimes looks remarkably uncomfortable, had decided to settle on the scanner: 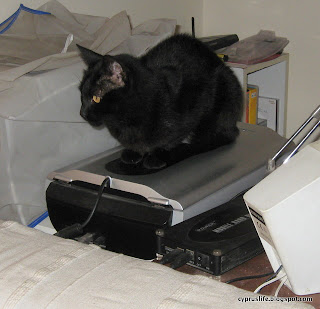 Just came upon your site. As we may be purchasing a cat, we need some advice. Which breed of cat is considered the most "affectionate". We want a loving, lap cat and one that will do well as an indoor-only feline.

Your advice would be appreciated.

We don't choose our cats, they choose us usually, and have all been totally random mixed moggies, so I don't know anything much about breeds. If we were choosing a cat, we'd go to a cat rescue centre and probably have a couple that seemed friendliest. Or else, if we knew someone whose cat was having kittens, we'd have a couple of those.