The day that King Malu did not, after all, go in the cradle...

I must preface this post by stating that Cyprus is a wonderful place. The people are great, and in many ways it's an ideal place to live. Even this winter has been remarkably mild, at least so far.

But one has to learn that in some things Cyprus simply doesn't operate like mainland Europe. People are not good with times, for instance. We - and they - joke that two o'clock 'Cyprus time' is really anything from two thirty onwards. If someone wants us to arrive somewhere between ten and eleven, they might say 'Oh, about ten o'clock Cyprus time'.

King Malu, the boat in which Richard was given a share, and on which he has been working extremely hard for the past few weeks, was looking very smart, ready for being moved into the water on January 13th. Tomorrow, in fact. There's still plenty of work to do inside, so she probably won't actually be sailed until March or even April, but the underneath is all now painted and sealed, and ready for launch. 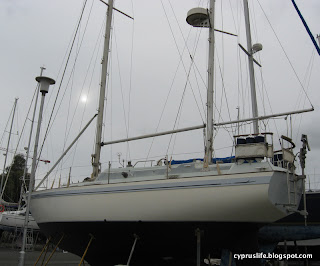 Other than the very bottom - the tiny strip of the bit sticking out underneath (which I am reliably informed is the keel) that is actually touching the ground. While the boat is still standing with those props, it can't be painted. So Richard spoke to the people who operate the crane that moves the boats in and out of the water. No problem, they said. Today - Tuesday - they would bring the crane when they had finished their other jobs for the day, and lift King Malu into the cradle. Then Richard and Tim could do the necessary sanding, priming, painting and anti-fouling at two-hour intervals in the evening and/or early Wednesday morning, and they'd move her into the water around 9am (Cyprus time) tomorrow. It would cost more, of course, but seemed worth doing.

Richard thought the move into the cradle would be around 5pm. Then, when he popped down to the marina this morning, they said 2pm. So after lunch, since the day was overcast, I accompanied him down to the marina. We wandered around for a while and learned that the crane-moving people weren't going to be around until 2.30. We weren't surprised.. so we went for a walk to find out why my phone was refusing to send texts. We were assisted by a very helpful man at the MTN shop who fixed the problem in about five seconds, and got back to the marina around 2.30. No sign of the crane-moving people, so we sat down for a while.

Around 2.45, we saw the crane start to move. Was it coming our way? Apparently not, since it moved instead towards the place where boats go in and out of the water. Perhaps another job had come up. Richard went to ask - no, apparently they needed to put some extra bars in the crane, and it was then coming to King Malu.

About twenty minutes later, the crane started on its way again. It stopped temporarily when a car was in the way, and for a bit longer to fill up with diesel. But at last we could see it coming down the little aisle where King Malu has been sitting for the past eight years. Richard started filming with the video camera. 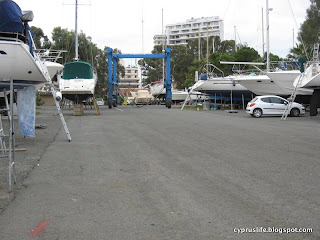 It wasn't long before the crane was in position to turn around, and then move slowly in alongside the boat. So we moved to the back of King Malu, to photograph and shoot its careful progress: 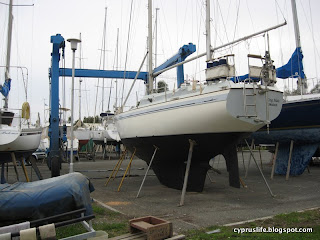 The crane moved very carefully - which is a good thing, of course. It got to about half way. And then it stopped. 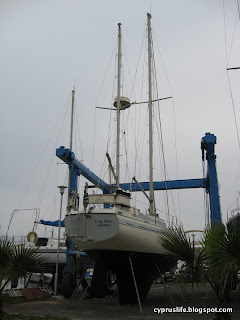 The men got out, and started gesturing, and walking around. We could see it was a very tight fit to get it in place. The boat on one side is not centrally placed in its parking slot, and the crane was perhaps an inch away: 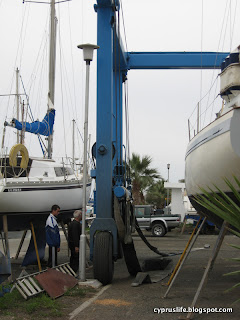 On the other side is a large lamppost, which may even have been put there in the past eight years, since King Malu arrived: 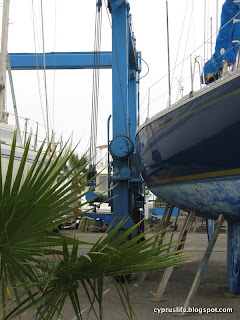 Could the crane be angled carefully? No, they had already tried that. The man in charge of the crane said he really didn't care about the lamppost. That could be knocked down. But the base of it is made of concrete, and if the wheels of the crane went over that, the whole thing would tilt to the side and probably damage the boat on the other side.

Here's the video Richard made of events to date, with annotations:

It's a good thing they care so much about the boats. But it meant that there was no way that King Malu could go in the cradle tonight. The crane operator said that he would get in contact with the boat next door, since they would have to move it further away, and so it can't be done until tomorrow.

So the plan is now that, around 10am (Cyprus time) they will first move the nearby boat a few inches further away, then they'll put King Malu in the cradle. Richard and Tim can then prime and anti-foul the base (apparently the epoxy layer isn't so vital) with a couple of hours gap between, and she can then be put in the water at some point in the afternoon.

Very entertaining blog entry! Had me in stitches! Good luck for moving her tomorrow.....

Wow...such an undertaking. Trust all will go well tomorrow. Just checked the Troodos webcam (it was out of operation for awhile) and see it looks very cloudy and a little snow.