Today is the first day of Lent in the Protestant/Western church. Yesterday was Shrove Tuesday, when many of us made and ate pancakes - traditional for the last day before Lent; historically it was to use up sugar, eggs etc from the household store, preparatory to Lenten fasting.

However, Lenten fasting doesn't seem to happen much in the Western world - at most people might give up chocolate, or perhaps computer games. Not flour and eggs.

This year, unusually, Western and Eastern Easters fall on the same date: April 4th. So that means that Lent starts the same week for us all. In the Eastern calendar, however, it's counted a little differently so that Lent actually began on Monday this week, after the Carnival weekend (where children dress up and go on parades... although traditionally it was the time to eat up the household meat, again prior to fasting.)

On Green Monday in Cyprus, people - I'm told - clean their houses from top to bottom (it's also sometimes known as 'Clean Monday') and then go out on picnics with their families and friends, and the children fly kites. Even if they're not fasting or cutting out meat during Lent (increasingly rare, even here) they don't eat meat on Green Monday.

We don't usually do anything to mark the date; however, Green Monday is a public holiday, so Richard planned to spend his day working on King Malu. But on Sunday we had text messages from a friend - the wife of one of his colleagues - suggesting we might get together for a picnic on the Monday. Since the weather was good, and it sounded like a good idea to get out and socialise for an hour or two, we said we'd like to do that. We were going to go somewhere near the Salt Lake, but in the event it was totally packed with Cypriot picnickers, even at 12.30 (which is earlier than they usually eat lunch).

So our friends suggested we go up to the Aradippou picnic site. The top area with benches and tables was apparently also full of people having picnics already, so they found a pleasant spot part-way up the hill.

They had brought some kites. During and after our lunch, the various children attempted to fly them: 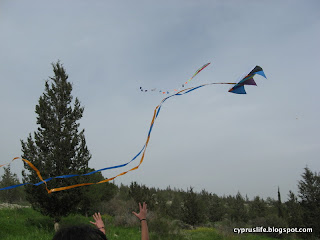 - but without any success. Richard, who watches wind speeds and other weather conditions closely since learning to sail, said that there wasn't enough wind. There were occasional gusts and the kites appeared to bob about for a few seconds, only to come crashing down. 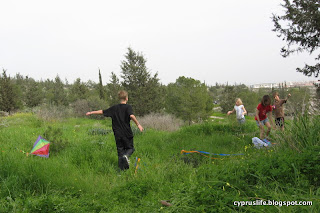 Still, the children had fun in the attempt, and in playing together for an hour or so, and the adults enjoyed the fresh air and catching up with each other.

You can see from the photos how very green Cyprus has become with the heavy downpours of rain we've had in the past few months. It really was a lovely day, too. Yesterday was warm as well, probably about 22C; today's a bit cooler and has been rather grey, though still nothing like as cold as it was earlier in the month.
Posted by Sue at 18:27

Those kids look very intelligent and the girl with the blond hair looks pretty...