Out of Cyprus: helping Tim upgrade his room...

Since we had rented a car for our time in the UK, Tim had asked us if we would go with him to collect a desk, chair and bookcase that he wanted to buy. He had a budget and several possible ideas; eventually he decided that he wanted a bookcase from Argos, and a desk from Ikea.

Tim has a pretty big room which is actually a loft conversion in my mother's home, so he can do pretty much what he likes in it. Here's the staircase up to his room, which gives him a lot of privacy: 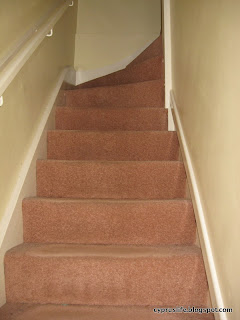 Ikea is about ten miles away - we hadn't been there for a long time. Indeed, the last time we came, as far as I recall, we left both Daniel and Tim to play in the ball-pool for little children for half an hour or so... and they're now 23 and 21.

Tim knew exactly what desk he wanted, but wasn't at all sure about the chairs. The advantage of Ikea over Argos is that one can try out the various chairs on offer - so we did.

Not being very tall, I found some of them rather too big for me.... 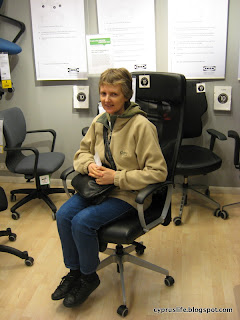 but Tim was able to choose one which he liked, that was within his budget, and we were able to resist the many appealing bargains we saw, being aware of our limitations in baggage allowance when returning to Cyprus! 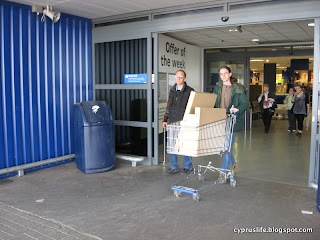 So we got the things back, and bought the bookcase at Argos. And then Richard suggested Tim might move his bed out of the bigger part of his room, to the other side of the staircase. And then suggested he move his wardrobe... and his bookcases... and his piano...

Tim would have preferred to think about it for a while, but we knew future days were going to rush by, and Richard thought it better to get the room more organised before Daniel arrived (sleeping on Tim's floor). So they started moving furniture. Of course, it meant a lot more chaos and mess was created before any hope of organisation appeared... 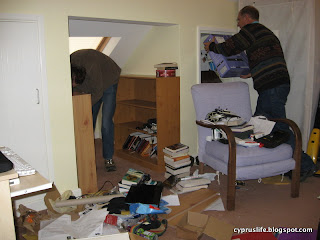 I was called in to organise his books and DVDs, which I very much enjoyed doing, and also to start going through some of the piles of paperwork, sorting the important from the rubbish. We managed to collect quite a fair amount of things to take to the dump, including the packaging from the recent purchases and an old monitor which Tim had been given by someone else who couldn't get rid of it any other way.

Here are Richard and Tim finding a new place for Tim's electronic piano: 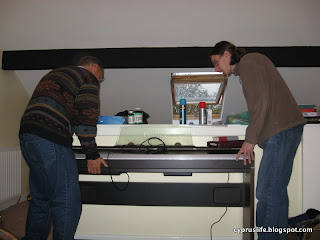 .. and at last, sanity reigned with his desk set up, and the new chair in place. 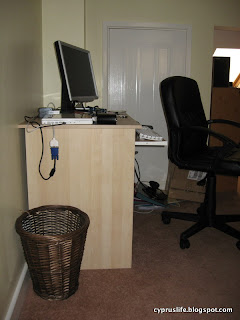