A remarkably busy couple of weeks in Cyprus

There has been a long silence on this blog. Regular readers (if there are any left) might be puzzled that I made extensive reference, a couple of weeks ago, to my preparations for Daniel and Becky's visit ... and then said no more.

The problem was not a change of plan, nor volcanic ash. It was simply that we've been busy - really surprisingly so - and I've felt pretty tired. Today is a public holiday for Kataklysmos (Pentecost) and there's nothing happening. Tonight, for the first time since they arrived, the four of us will have an evening to ourselves.

A quick summary of our evenings in the past fortnight: 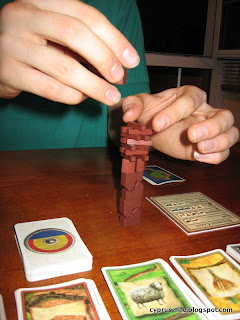 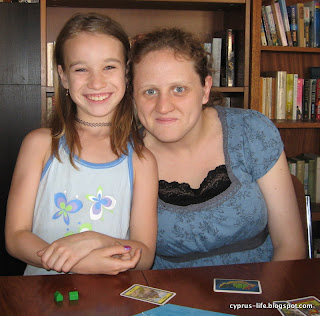 In the evening we were invited to pizza with our friends Mark (returned from his trip away) and Joan; Emily was still there. And since the three young people finished their meal before their aged parents, they played a quick card game while they waited for us: 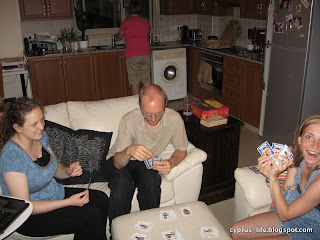 Since Emily had enjoyed her first game of Settlers, we had yet another foray into Catan. And at the end, since Emily's unlikely to be in Cyprus for at least another year, I took a group photo: 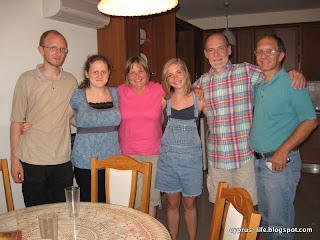 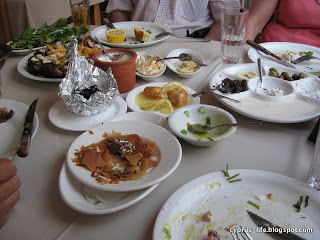 So. A very enjoyable couple of weeks, with friends, games, and lots of food. I have spent a lot of time in the kitchen preparing meals, and desserts... including ice cream and cookies. I've been to the local shops almost every day for more fruit and veg, milk, cheese, or other necessary ingredients. And of course I've done my regular cleaning of the house, and laundry, and helped at Tots, and looked after the lad who comes on Thursday mornings. I've kept up to date with my Settlers of Catan blog, as evidenced from the links above, because if I didn't I wouldn't have a hope of remembering what happened in the games.
Richard, meanwhile, has been working most hours, and also spending some early mornings and the weekends at King Malu. They really, really hope to be able to start sailing her soon. On Saturday he took Mike and Daniel sailing for the morning.
Today, being a public holiday, Richard is at the boat all day. Becky is busy reading, and Daniel hasn't got up yet...
Posted by Sue at 11:04

Wow--I think you outdid even us on busy-ness!!

Yes, I still read you from time to time.