Lots of games in the past few days

Daniel mentioned yesterday that some of his Asian friends were surprised at how often Europeans and Australians play board games. I suppose even some Europeans and Australians might be a little startled at how often we have played games in the last few days. But it's summer... and we're still very much enjoying having Daniel and Becky staying. They both enjoy games, so it's good to spend an evening - or even an afternoon - with a board game to focus on. None of us is particularly competitive but games give an interesting challenge and are often the start of good conversations.

On Saturday, Richard was spending the day working on King Malu. Daniel and Becky said they'd like to learn to play 'Ticket to Ride', so after lunch we got it out. I explained as we went through, and they both enjoyed the game. I don't even remember who won, but think probably it was Daniel. Here's Becky part-way through the game, where the trains are nicely distributed around the board. 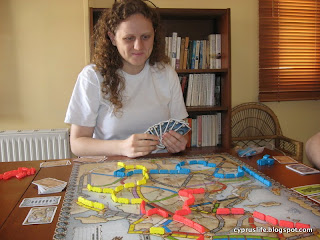 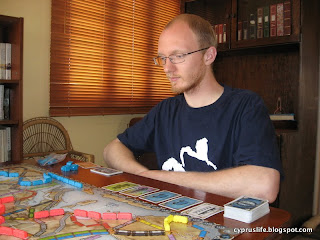 Then I had a text message from a friend, asking if her oldest daughter could come over to play a game of Settlers. Daniel went to spend a bit of time with Richard at the boat, but Becky said she was always up for a game... so we agreed.

I wrote about the surprisingly fast Settlers game we played on my other blog; here's Marie at the end of the game: 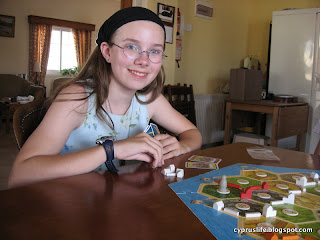 .. and since it was over so very rapidly, we decided to play a game of Ticket to Ride. Marie was the winner by a LONG way. 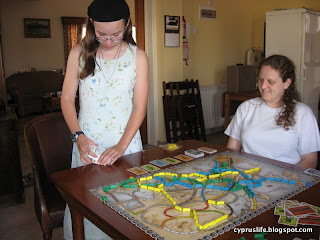 So that was three games on Saturday.

On Sunday evening, we had a family game of Settlers, with the variation called 'Seafarers of Catan'. Daniel won a closely-fought match: 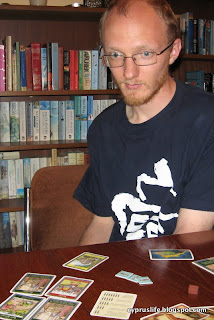 Last night, Richard had to do yet more work on King Malu. So the rest of us decided to have another game of Ticket to Ride, which Becky won: 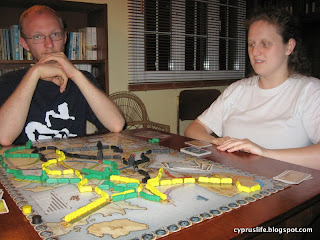 (And yes, if anyone actually notices such a detail, some of the stations were placed on the game afterwards, incorrectly, to make it look more interesting)

It's quite a quick game with three people, so afterwards we decided to play a basic game of Carcassonne, which neither Daniel nor Becky had played for many months. Becky won that too. And after we'd done all the scoring, and removed all the little player dudes, we looked at the board which had far more 'holes' than Richard likes... if he'd been there he would probably have filled some of them in just to make it look better, even if had had not benefited. 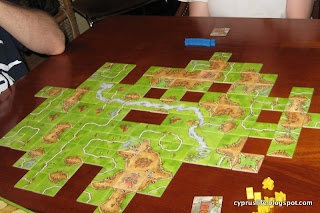 So then we had the idea of filling in the holes anyway, to make it look more interesting. Of course, everything had to match correctly on all sides, and we agreed not to move any of the starting river. I moved a few pieces a little half-heartedly, but Daniel has an excellent eye for this kind of thing, and it was probably only about five or six minutes before we had this tidy square: 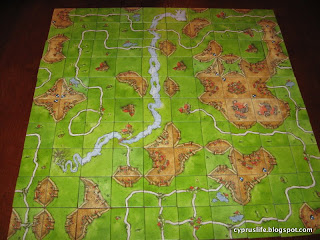 Unfortunately there were two pieces left over. There were 102 in all and we'd made a 10x10 square. We did debate trying to re-create a Carcassonne 17x6 rectangle... but decided we liked the tidiness of the perfect square.

But then we discussed how many completed cities would be scored if there were a lying-down dude (officially called a farmer in Carcassone) somewhere in the middle of the board. And when we realised there were some places he couldn't access, Daniel moved a few more tiles around, and within a couple of minutes made a board where almost every city could be accessed via just one giant 'field'.

And then, for good measure, we added carrying handles on the side, to so speak...

Richard arrived home at that point, and while we did wonder if he'd think we'd actually played the game to finish that way, he did realise at once that we'd rather manipulated the board...

We didn't want to put it away at first. But then Daniel decided to be even more creative... 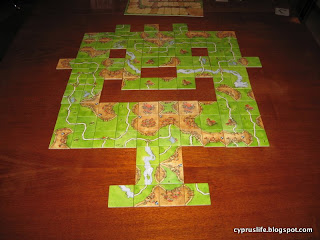 I love your blog and have been reading for 3 years.

Please keep posting, I check every day to see if you have updated.

However....I do think that you have become a bit obsessed with your board games. lol

I like to see your pictures and hear about how Daniel and Tim are doing.

I also love reading about your trips to the Frutaria and how you manage to cook and freeze. Oh! and about the weather.