A few drops of rain in Larnaka

Although the past winter and early spring in Cyprus were very wet - sufficiently so that water restrictions have now ended - we hadn't had any rain for quite some time. Possibly not since we returned from our visit to the UK a month ago.

But on Thursday morning the sky was rather grey, although the sun was shining (as usual in Cyprus) and it felt muggy. The weather sites didn't predict any rain. Nevertheless, in the early afternoon, I heard raindrops outside. Large, heavy tropical style raindrops. So I grabbed my camera: 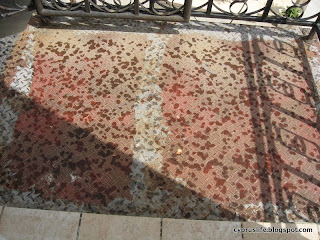 As is clear from the shadow, the sun was still out. I rather hoped there might be a rainbow, but there wasn't.

Thirty seconds later, it was impossible to see the gaps in between the drops.

Thirty seconds after that, it stopped.

A minute later, it stopped.

And then the clouds rolled away and the sun came out. Unfortunately it felt more humid than ever, but a slight breeze came up, and it was at least slightly cooler.

Oh, and if you happened to find this post because you wonder what the weather is going to be like in the next weeks and months, you might like to look at my page Weather in Cyprus in Summer, on my site about Cyprus.
Posted by Sue at 19:22