Of food and rings and party cakes...

Last Thursday, I wrote about Jacob's birthday evening. I showed a photo of his rather small birthday cake, and mentioned that there was another cake as well.

Here's a picture of that other cake: 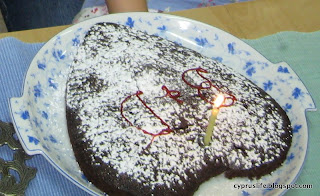 You might notice that it's heart shaped. You can probably also make out the letters 'D' and 'B'. That's because although it was Jacob's birthday, he thought it would be rather nice to make a cake in honour of someone else. Or rather, two people.

One of them is my older son Daniel... and I shall direct you temporarily to his blog, where he made an important announcement.

It's another milestone in the life of our family. Last Wednesday, Daniel and his girlfriend Becky went with some other people up to Troodos, to turn on water and check the campsite. Over lunch, Daniel - for whom Troodos is one of his favourite places in all the world - proposed to Becky, and she accepted. Just as well, since he had bought her a ring earlier in the week.

They told us in the evening, and spoke to Becky's parents too. The following day they wanted to let various other relatives, close friends and colleagues hear the news before it went viral on Facebook. So I didn't mention it to anyone, although I was smiling so much that I'm surprised nobody guessed.

Not that I saw many people on Thursday morning.

However, Richard did just happen to mention the good news to some friends at the office, one of whom is Jacob's father. And since he didn't say anything about it not being widely announced just yet, the whole family knew - and were thrilled - mid-afternoon. And although it was Jacob's birthday, he was generous enough to want the major cake to be for Daniel and Becky: 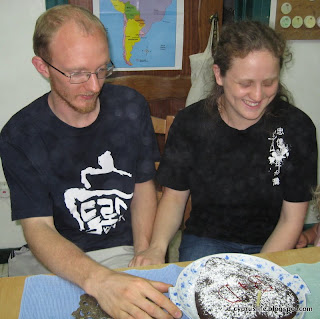 After eating, we played a game of Settlers, which Jacob won. 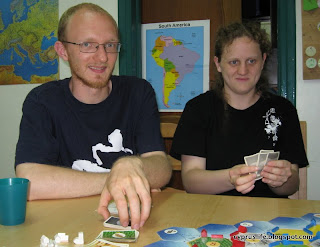 Richard and I wanted to do something to mark the occasion too, and suggested we might take Dan and Becky out for a meal. They're not very decisive, so we thought we might just go to the local meze house - but after much thought, Daniel said he'd like to go to Aztekas. That's a slightly up-market Mexican restaurant along the Dhekelia Road, where we've been to mark other special occasions. It was where we went for a last family meal before Daniel joined the Doulos, four and a half years ago, and where we went in the evening of my birthday, after a wonderful day out in Troodos, a little over two years ago when Daniel was home for his first furlough. 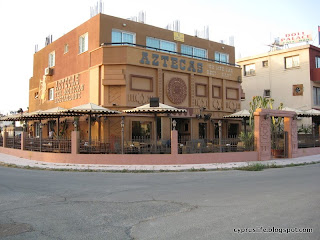 We decided to have one starter between four of us: 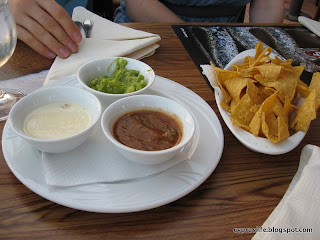 Then the food, as ever, was excellent. This is what both Daniel and Becky had: a meat version for Becky, and the veggie version for Dan: 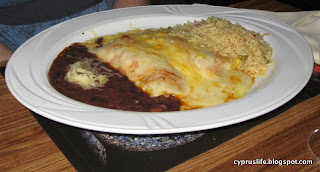 This is what Richard had: his usual (if one can call it 'usual' at a place we visit about once every two years) chimichangas: 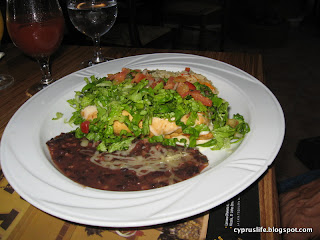 Daniel said he was a bit concerned that I was taking photos of so many things rather than simply enjoying life... but that's one of the great benefits of digital cameras.

We decided not to have a dessert at Aztekas; instead we thought we might go to the yogurt ice cream place in Larnaka.

But before we left, as usual, the waiter brought us some margharitas 'on the house': 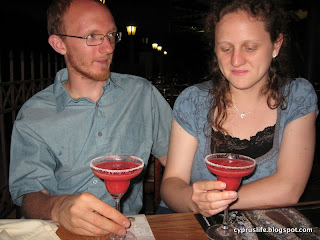 Congratulations and Best Wishes to you all. How exciting. As you might guess Troodos is one of our favorites also and to be able to picture in my mind is wonderful......Praying there is more than sufficient water this summer.
Please convey to Danial and Becky our good wishes and God's blessing on their engagement announcement. We'll be anxious to hear of future plans.

Congratulations to Dan and Becky on their engagement!
Love and blessings to you all as you begin this new, exciting and busy (as we are discovering!) time in your lives. Lynda and Andy x