I keep an ongoing online 'to-do' list attached to my gmail account, which includes both the important (such as bill-paying) and the trivial (such as mopping the floor); I can schedule things ahead or list tasks to do each day. I'm not actually very organised, naturally, but keeping a list that pops up every time I open my email is quite constructive. I usually have several things hanging over from previous days - if I don't re-schedule them - and find it oddly satisfying to check things off and then clear them from the lists.

On Thursday night, I actually got to the end of the things I'd planned to do for Thursday and the previous days. I was rather pleased with myself.

On Friday, Richard and I had planned to go by car to the Froutaria - it's only five minutes' walk away, but I wanted a kilo or so of lemons (for lemonade), two or three kilos of apricots (to make jam), a couple of kilos of tomatoes (to chop and freeze), some potatoes and sweet potatoes, apples, oranges... and I know from experience that there are often some irresistible bargains in the 'pink bag' aisle where produce is reduced. No way could I carry all that - and more - home on foot in one trip. Particularly as I would also need to buy two or three kilos of sugar (there are some other groceries available in the froutaria - it's not just fruit and veg). I wanted to make the year's supply of apricot jam as well as a new batch of lemonade and since I had nothing else planned on Friday, thought I would do it then. Apricots are plentiful and have come right down in price, but I don't want to wait any longer since the weather is getting hotter and stickier.

Thursday night, I didn't sleep all that well and for some reason woke about 4.30am. I couldn't get back to sleep so at 5.30 I got up. I had some coffee, and read for a while, then thought about doing my usual early morning mop of steps (inside and out) when I had a strong urge to switch on the computer.

I thought I would probably get distracted but decided I'd read email and Facebook for twenty minutes, and then get on with the mopping.

I found a long email from my friend Sheila who lives around the corner and who was expecting her sixth baby any day. About half way through the email, I did a double-take. She said that she had resumed writing in the middle of the night because her waters had broken... and then the next few sentences were punctuated with contractions at decreasing intervals. Since I was on call, day or night, to look after her three daughters during the birth (which was planned to be at home - unusual but not illegal in Cyprus) I rushed upstairs to take my shower and get dressed, mentioning to a rather sleepy Richard that I might get a phone call any minute.

Sure enough, Sheila phoned. So I walked to their house, collected the girls around the same time as another friend collected the two boys, gave Sheila a hug, and brought the girls back here. They were equipped to stay overnight if necessary, but I didn't think that was very likely since the contractions were about every two minutes by that point....

It was around 7.15am by the time we got back here. I hadn't even had breakfast. For the next three hours I sat on the floor and played lego, printed pictures for Katie (nearly 5) to colour, answered continual questions from her, produced bananas and cereal at random intervals for Helen (21 months) ... and realised that I am actually rather older than I was when I had my own two sons at that age. Sigh. I did remember to put bread ingredients in the breadmaker but nothing else remotely domestic.

At 10am Sheila phoned... and said the baby had arrived nearly two hours earlier! The midwife only got there just in time to catch the baby girl, who did not yet have a name. So we went over to see them :-) 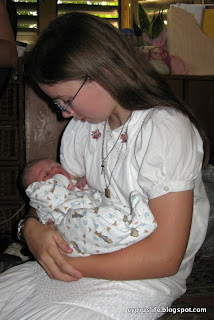 I took some photos for them, and they asked me to stick around for a while... after about half an hour the two little girls were getting increasingly hyper and excited so I suggested I might take them for a walk for an hour or so. 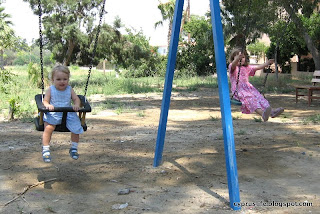 Twenty minutes on the local swings was easy for me, but then we walked to the nearby nature trail which was hard going pushing a buggy... and Helen fell asleep within about five minutes so she couldn't get out and walk. And Katie talked non-stop...

We got back, hot and very thirsty (having forgotten to take water) by about 12.15 and I left half an hour later, so I could get lunch ready. Thankfully Daniel and Becky saw how tired and hot I was, and did that for me.

In the afternoon, we drove to the Froutaria to do the shopping I'd planned for the morning. We bought so much that we had to use a trolley - for the first time since we moved here! - and I was very glad we took the car. When we got home, we chatted for a while to some friends whose daughter was practising on Daniel's drums.

Then we had to go out to choose a gift for a family who are leaving soon, and I wanted to get something for the new baby too (I couldn't get it in advance as we didn't know the gender). The first was relatively easy... but finding a baby gift is not so easy in Larnaka. Richard wanted to do something at the marina so dropped me in the town centre for an hour... and I went into dozens of shops, with no luck. Eventually we met up around 5pm and drove to a bigger shop and managed to find something we liked there.

Dan and Becky cooked us a potato curry in the evening, and even cleared up, which was wonderful. Then we played a board game, and then Richard and I called in to see Sheila and the baby, as she'd texted to see if we could go over... and it was 11pm before I was in bed. Which is late for me.

And for some reason I didn't get to sleep for ages despite being exhausted. And woke at 5.30 on Saturday morning. Surprisingly, although I was tired and a little brain-fogged, I didn't have a headache. Dan and Becky spent the day in Troodos helping to put tents up at the camp-site, and Richard was working on King Malu. So I had the day to myself. Since it's getting warmer, things seem to take longer; I had to pop to the local supermarket for cheese and milk and a few other bits and pieces, and I also made the planned lemonade/cordial/squash since by then we had completely run out. I also made some more almond milk... Richard's trying to go dairy-free.

I was asleep by about 10pm and slept until nearly 6am, which is a huge improvement... but I woke with a nasty headache. I decided not to go to church, knowing I had to spend yet more time in the kitchen. At lunch-time we were going to the farewell meal for some friends, and I'd been asked to take a couple of desserts. I'd thought about something baked, but realised I could throw together some store-cupboard cold desserts and not use the oven. We also have our friends (the ones with the new baby...) over tonight for a shared cold meal, so I needed to make bread and desserts for that too.

So I made some jellies and banoffi pies, and the breadmaker made a couple of loaves of bread. I cleared up the kitchen and mopped everywhere since it hadn't been done for a couple of days.

We were out for about two hours at the lunch-time get-together, and enjoyed good food and catching up with various friends - although of course we're sorry to say goodbye to yet another family who are leaving Cyprus. It happens all too often.

And now I'm sitting down for half an hour; I even switched on the air conditioner in the study, as it's quite sticky today. All I need to do now is empty all the bins (since the dustmen come Mondays, Wednesdays and Fridays in our area) and set the table for eleven.

Perhaps I'll get time to work on my websites or do some writing tomorrow...
Posted by Sue at 16:57

OOOOhhh - how lovely! Such a new person - a priviledge to view. Home babies are extra-special :-))) (My DD2 is one). Is this an HE family too?

Yes indeed, we got to know them originally through an international home ed mailing list some years ago and were delighted when they moved to Cyprus 18 months ago and found somewhere to live just five minutes walk away from us :-)

Hello. Would you be so kind as to answer a couple of questions?

1. How many British expats are there in Cyprus?
2. Is there a flight of expats back to the UK because of the economic crisis?

I don't know if there are official numbers for ex-pats in Cyprus; since being in the EU it's much easier for them to come here; many come and go depending on the season, others come for a few years only, and of course there are many thousands who come for a few weeks' holiday.

However, we certainly know of some families who have now returned to the UK due, at least in part, to the worldwide economic crisis.