I'm very thankful that Daniel has found a lovely girl whom he's going to marry next year, and that they're able to work together in their calling.

But, like so many parents in Cyprus, it's something of a bittersweet thankfulness. Our sons are not just elsewhere in the same country, they are abroad - a plane journey away. If we still lived in England, we'd probably see Tim at least once a month - depending on where he was at university - rather than just a couple of times each year. And now that Daniel's in England, we'd probably see him more too.

Having said that, though, the time they spend in Cyprus - and I'm extremely thankful that they want to spend time with us - is probably more focussed, and possibly even longer - even if condensed to just one or two visits - than would be the odd weekend together if we lived in the same country.

The past ten weeks seem to have flown past - and yet, looking at photos, it also seems a lifetime ago that Daniel and Becky arrived here in May. They didn't plan to do a great deal while they were here - but we've spent time with friends, played innumerable games, eaten out. A new baby was born to our friends, and she's now over a month old, and we celebrated our 30th wedding anniversary.

Moreover, Cyprus is where Daniel proposed marriage to Becky, and she accepted. So it was very special to us that Daniel stayed on an extra two weeks by himself when Becky returned to a friend's wedding, since for any future visits, they will almost certainly be together.

But no holiday can last forever, and yesterday evening Daniel flew out of Larnaka. He had a lot of travellling ahead of him. He's on his way to work at a conference in Germany, but direct flights there were extremely expensive and infrequent. Flights elsewhere in Europe plus a train would have been even more expensive. So after much discussion, and several possible plans, he opted for the least expensive option, which unfortunately involved the longest hours of travelling. He flew to Gatwick, and was then taking the train to Carlisle, where he works, and where Becky would meet him. He only has a couple of hours in Carlisle, since he will then join the crew who are also going to Germany, travelling by land and ferry. However, it does mean that he won't need to take all his Cyprus luggage with him.

It has become a family tradition to take a photo of our sons as they leave Cyprus. So here's Daniel striding towards the airport with his luggage on a trolley (yes, it's a wheely suitacase, but wheeling on tarmac damages the wheels): 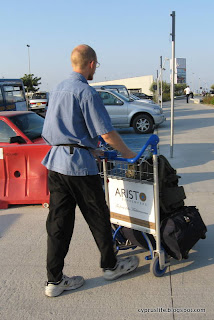 Since I hadn't seen the new airport in daylight before, I took a photo of that too: 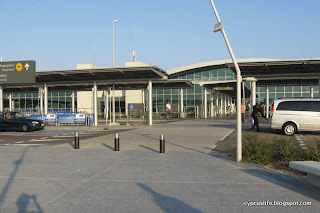 And here's Daniel trying to make sense of the departure board inside the airport: 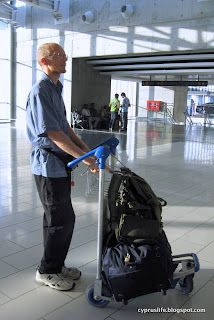 We saw that a flight to Gatwick was leaving within a few minutes of the time he expected to leave. We assumed that was it. He had already checked in online, so dropping off his luggage didn't take long. Then, since the gate closed at 7.30 (according to his boarding pass) and it was 7pm already, we waved him off. We were in the airport less than 20 minutes, so we didn't even have to pay for parking.

I wondered if Daniel would have managed to get on the train, but evidently he had allowed sufficient time. He texted me about three hours ago, saying that he was on the last train, and hoped to arrive in Carlisle in a little more than three hours. Which is about now...

Daniel's cat Sophia was somewhat disturbed when he was packing yesterday, and has been wandering around the house looking a bit lost. But she coped last time he left, and the time before... soon she will be ordering Richard and me around again.
Posted by Sue at 12:01

Congratulations Sue and Richard on your thirty years of marriage. Lynda and Andy x