These gorgeous flowers were delivered yesterday: 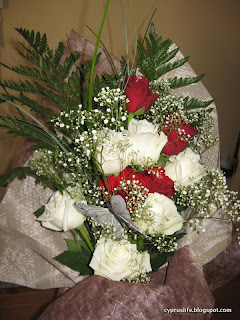 They came from my wonderful sister and her family. They were totally unexpected, but very much appreciated.

The reason is that yesterday was our 30th wedding anniversary. The last time we had flowers delivered in Cyprus was exactly five years ago, also from my sister. I wrote here about our 25th anniversary, with a photo of those flowers.

Of course, twenty-five is a very special anniversary. Five years ago, we celebrated for almost the whole of July. First we had a few days away on a mini-cruise of some of the Greek islands, using a generous gift we had been given to spend on ourselves.

Then we held a party for about thirty of our friends. With no air conditioning in the kitchen, it wasn't much fun preparing for a party in the middle of July in Cyprus. I reflected at the time that at least we wouldn't have to have another mid-summer party for another fifteen years or so...

But this year, Daniel stayed with us an extra fortnight after Becky flew back to the UK, so that he could be with us for our 30th anniversary. So we thought that perhaps we'd invite just a few of our closest friends over on Sunday night for a little get-together. Nothing special, we said. Absolutely no presents. Just cold buffet food, which I determined would be as simple as possible. No more than twenty of us in all, since we no longer have a big garden to sit out in. No children, either, other than one or two babies, and my youngest best friend Helen who is now 22 months old.

It was an enjoyable evening. We had, amazingly, finished all the food preparation nearly two hours before anyone was due to arrive. So I mopped the floor, and we took cool showers, and were ready. No headaches. I wasn't even particularly tired. Daniel moved the furniture around to make it easier to circulate, and I found I could relax and enjoy it a great deal more than the party five years ago.

Someone suggested taking a photo of Richard and me, and of course Helen wanted to be in it too: 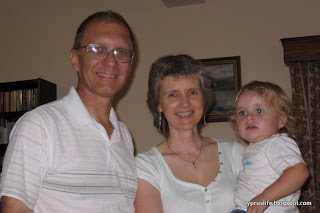 The actual anniversary date was yesterday (Monday). Richard went to the office as usual, but we ate some of Sunday's leftovers for lunch, and then in the evening went out to eat. We took Daniel too, since he's only here for another couple of days. We went to Alexander's, our favourite sea-front restaurant, where the choice is wide and the portions huge, and there is plenty of vegetarian fare.

I took several pictures of Daniel, of which only this one came out well: 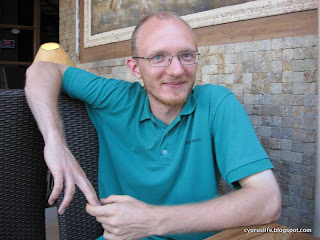 He took several of us, most of which have rather strange expressions. Clearly I should have combed my hair - we only walked about half a kilometre from where we parked the car, but it was a little windy. Anyway, this is probably the least bad of the two of us: 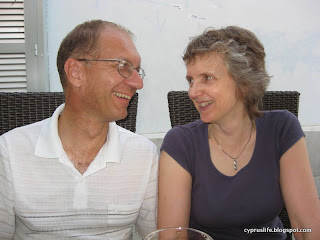 Sharp-eyed blog visitors might notice that I am wearing a necklace in both the photos. I don't often wear necklaces, but this one was another complete surprise: Richard bought it for me in Lefkara as an anniversary present. It has two pearls in it, since this is our Pearl anniversary.

We weren't very original with our food choices. Daniel and I both opted for the vegetarian lasagne, which was very good although I could not finish mine- they come with a bit of salad AND some chips (fries). Richard had the excellent fish and chips meal, which is far too big for me: 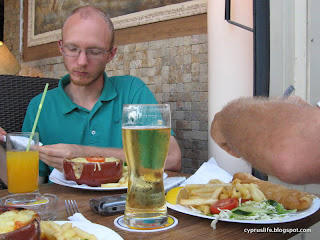 When we got home, it was only 9pm so we played a game of Cities and Knights of Catan.

We're still celebrating somewhat today. I took this picture of the cards we've been given for this anniversary: 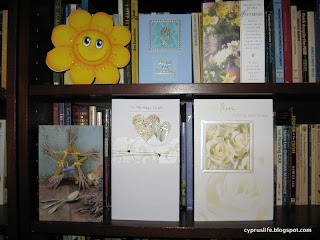 Richard went to the PO Box and came home with a photo-book, which is our anniversary present to each other, created online at the excellent Kodak Gallery. I recommend Kodak online highly. We upload the best of our digital photos there and order prints every two or three months. They are far better quality than having them done in Cyprus, and considerably cheaper even though we have to pay for postage. Their photo books are excellent value too, at £19.99. Even better - a couple of weeks ago I was sent a discount voucher for 40% off anything ordered on July 9th. I knew it would probably arrive after our anniversary, but it made it even better value and prompted us to sort the photos and make it.

Inside the front cover is a scanned image of our main wedding photo from thirty years ago: 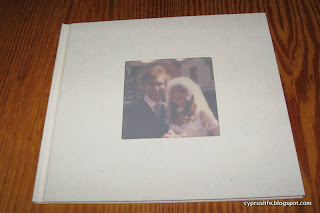 Then we have some prints of scanned photos of us in the early 1980s: 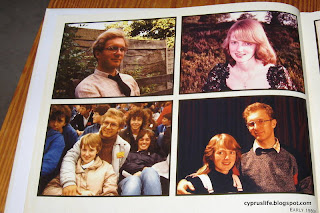 Followed by some of our grandparents, and the boys as babies. There are different possible formats for each page, so for the boys' childhood years I opted for nine per page: 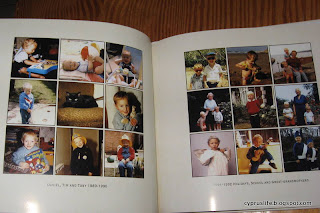 There are 20 pages altogether, working through the thirty years of our married life so far. At the end are pictures of the family from the last few years: 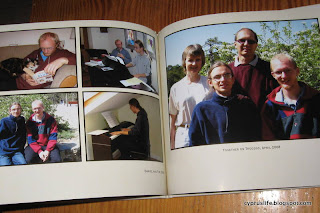 And at the end is one of the four of us, taken in April shortly after my 50th birthday: 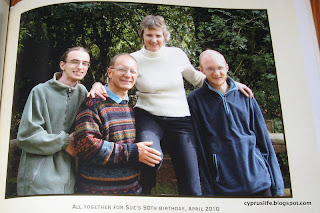 At lunch-time we ate more leftovers from Sunday night. I think we'll be doing that for the rest of the week....
Posted by Sue at 17:19

Many, many congratulations and blessings on your 30th wedding anniversary.