Rain in Cyprus, perhaps heralding the start of Autumn at last

The weather continued hot for most of this week. Not that 30-32C is hot compared to the summer temperatures we saw this year, and the humidity was much reduced. Overnight, we stopped running the air conditioning for more than an hour or two, and first thing in the morning I enjoyed the cool breezes, while the temperatures were only 26-28 or so.

On Friday, people said the weather in Cyprus was due to break. The forecast was for rain, off and on, all day. There was a good chance of rain first thing in the morning ... but, no sign of it when I woke up yesterday. The sun shone, and if anything it was a little warmer than it had been.

Then, around 10am, I noticed that it was really quite cloudy: 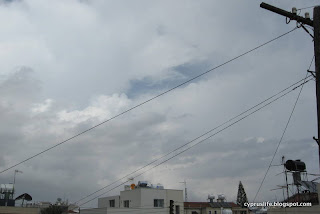 Then I noticed a faint rumbling, as of thunder. The sky darkened. And then... yes, it started to rain. Not very heavily, and not very long. Just enough to dampen the rooftops outside.

The sun came out again, and I wondered if that was it...

But about ten minutes later, it started to rain again. More heavily, this time, and it must have lasted at least five minutes: 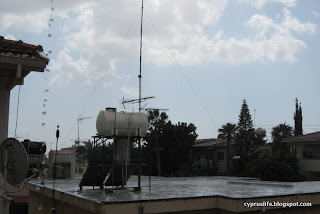 Then it stopped, and the sun came out.

Thankfully, it was cool enough that there wasn't much extra humidity. There was rather a nice breeze, instead.

There were a couple more short showers during the day, one of them for perhaps ten minutes but no more. Still, everywhere seemed cleaner and fresher; it was enough rain to wash the dust from the rooftops, and down the streets.

Last night, I didn't even think of switching on the air conditioning.

Around 4am I woke, feeling oddly uncomfortable. In my not-quite-awake state, I couldn't work out for a moment what it was. Then suddenly I realised... I was cold. Something I had not felt for so long that I'd temporarily forgotten what it was like.

I pulled the sheet over me, and looked forward to hunting out the thin duvet soon.

Perhaps we'll have an Autumn this year.
Posted by Sue at 21:46