While I'm far from being geeky or even technologically minded (I STILL haven't learned how to switch on our television...) I very much appreciate the modern ways of being in touch with our sons. Living in Cyprus has many benefits, but it's hard being a couple of thousand miles away from our sons. So, we chat from time to time on one of the instant messaging systems, exchange emails, occasionally use mobile phone texts, and recently have started - albeit rarely, so far - using Skype.

On Tuesday evening, Tim was chatting (typing) online, and asked if we could load Skype to chat as he was feeling a bit homesick. He then said, jokingly, that he wished we could play a game of Settlers via Skype. He did not expect his comment to be taken seriously, but I wondered if it might be possible... and mentioned it to Richard, who was sitting in the living room. Richard thought it could indeed work... although he wasn't sure if the webcam would be good enough quality for Tim to see the board. And I couldn't really imagine how it could work... however, it seemed like an interesting (albeit bizarre) idea. So I set up a Catan board on our little coffee table in the living room.

And Richard set up my little webcam on a chair, pointed at the board: 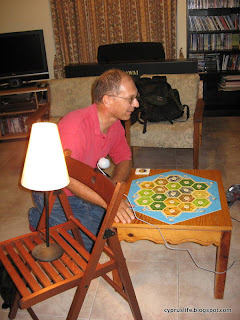 .. and the laptop sat on the sofa, facing the game, so that we could see Tim via Skype: 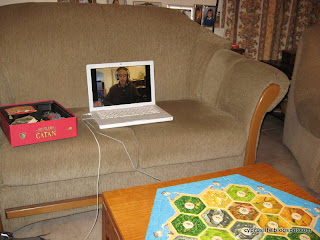 Could he see the board, including the numbers, we wondered?

Yes, he could! And while we'd only set it up to see if it was possible, it looked like quite a nice layout, and we had half an hour available before Tim needed to eat, and Richard needed to go out... so we thought we might start. Tim borrowed the resource cards from the set in my mother's house where he lives, and it worked amazingly well: 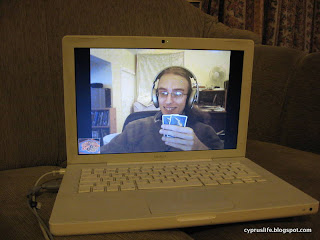 (For anyone interested in detail about the game itself, I wrote about it on my Settlers blog, in a post called Settlers of Catan via Skype)

When it was 8.30 (Cyprus time) we had to pause the game, but were so involved that we left it set up, and Richard made sure he didn't stay out long... and we resumed at 9.30.

It was very enjoyable. It felt surprisingly natural, since Tim was sitting there on the sofa (albeit squashed up inside Richard's laptop, and unable to make the moves physically). It's definitely something we will try again in future... indeed, long after I'd cleared away and gone to read upstairs, Richard and Tim were figuring out ways to make it easier. Apparently using the video camera as a webcam will make the clarity a great deal better for Tim.

Still, despite the wonders of modern technology, I had a hard time putting the game away again at the end: 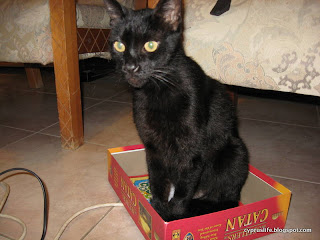 That is such a sweet and clever way to stay in touch with some one young and dear.

How neat to be able to do that.

And even in Cyprus, cats love to sit in boxes.

One of my friends plays a lot of online settlers - might be easier than using the real board in two places.