When we received our information pack about recycling in Larnaka, the booklet told us that there would be green 'bell-shaped bins' appearing in certain spots for glass recycling. The picture didn't look exactly bell-shaped, but fairly distinctive. I've been looking out for them in the past week or so, but had not spotted any.

Recycling in Larnaka is supposed to begin in October, with the first kerbside collection of PND (plastic, metal and drink cartons) and paper in our area this evening. So I wondered if the glass recycling bins might have appeared. According to the booklet, there should have been one outside the primary school on Fanoroumeni Avenue, and one by the St Lazarus kiosk. Since I usually walk down Fanoroumeni Avenue to check our PO Box for mail early on Monday mornings, I decided to take a couple of glass jars with me today, just in case....

Sure enough, right in front of the school as I walked down (on the shady side of the street) I saw this: 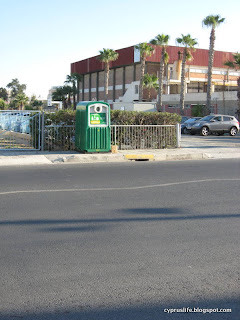 I kept walking, collected our mail, and then walked right around St Lazarus Church. I have no idea where the 'kiosk' is - and I did not see any signs of another green recycling bin. So I walked back on the sunnier side of the road - at 7.45am it wasn't yet too hot - and soon came to the school: 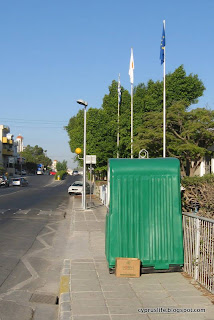 I did wonder if the bin would be rather full, but when I gingerrly posted my empty mayonnaise jar through the hole at the front, I heard a plop as it fell to the ground. Either it had recently been emptied, or nobody else has used it.

I then posted my empty pickle jar in, only to hear it break as it landed. Oops. We're not supposed to bring broken glass to recycle... but I suppose it's inevitable that some items will break as they're put inside.

I'm quite pleased that these are the only two glass items we've collected in the past fortnight since we first learned about the new recycling scheme for Larnaka and district. Evidently we haven't been wasting as much as I had feared.
Posted by Sue at 15:44