It seems to have become another tradition that I write a blog post on Christmas Eve, including - as the first image - a picture of this year's cake. Not that it differs much from last year's or the year before's... I make it from the classic Delia recipe, cover (usually) with shop-bought marzipan a day or two before I want to ice it, then make royal icing for the top layer.

This year I decided to use aquafaba rather than egg white for my icing, and it ended up slightly runnier than usual, but perhaps I didn't beat it enough; or perhaps I didn't add sufficient icing sugar. In any case, with my standard decorations and some glacé cherries, it seems to have turned out all right: 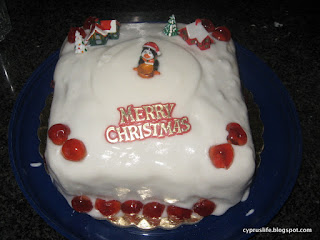 Tim has made some peppermint creams using aquafaba too. It has the advantage that one can use just one tablespoonful to make a smaller quantity than an egg white would. Besides, even with the availability of free-range eggs, we were never entirely happy about raw egg white, and we never knew what to do with the leftover yolks at this time of year.

But I should back-track a little.

For the first few days of Daniel, Becky and David's stay, we (or they) went out for walks each morning, so David could get a chance to run around. Then we had three days of almost continual rain. And when it rains here, it really rains. We were going a little stir-crazy, so last Thursday I texted the organiser of the Community Church Tots group and asked if we could join their last event of the year. We were warmly welcomed, and David enjoyed running around... and also eating a large amount of the snacks, long past the time when the other children had returned to playing: 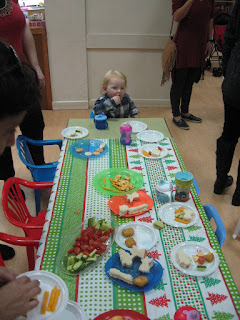 On Thursday evening, during the course of playing a game with friends, Richard and I both started feeling as if we had very bad colds: sore throats, blocked noses, headaches and exhaustion. There's a nasty flu-like cold going around, which comes on very quickly and lasts several days. A week later and we're still not fully over it, although we've kept going, and are certainly better than we were a few days ago. Mine had quite a setback when I got caught in pouring rain early Saturday afternoon, after popping to the local fruit shop in what I thought was a break in the rain...

It felt as if Christmas started properly later on Saturday, when we went to see a performance of 'The Snowman' by the Little Muse Theatre company. Everyone was supposed to dress in white: David was wearing an entire snowman suit for the occasion: 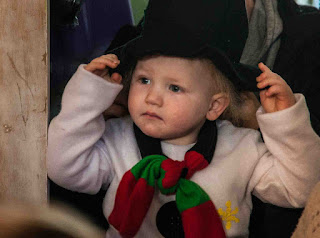 He's a lively little boy, into everything, and doesn't sit still very often. So we expected to have to run around after him during a 45-minute production: 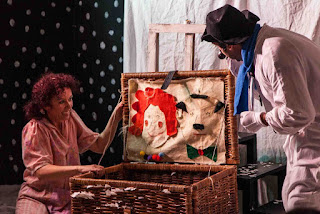 But he sat on Daniel and, for the majority, was absolutely mesmerised: 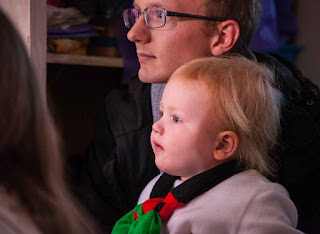 On Sunday, the rain gave way to sunshine, so after the morning church service, we wandered down to the sea-front, where David paddled in the sea for a while: 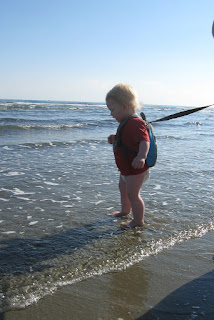 Becky went barefoot in the water with him; she said it was a bit cold at first but soon felt quite pleasant. David didn't seem to notice the chilliness at all.

After that the six of us had lunch at Alexander's: 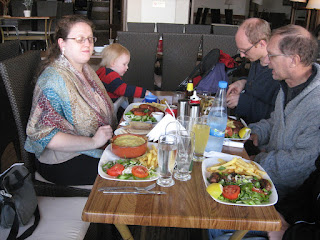 We never set out to create traditions, but eating at Alexander's on the Sunday before Christmas has become a regular event for us, and I very much like not having to think about food for one day in this busy time of year.

Monday was a good day, too. In the evening, I took photos of the younger cats, thinking this one of Alex would make a nice Christmas photo for next year: 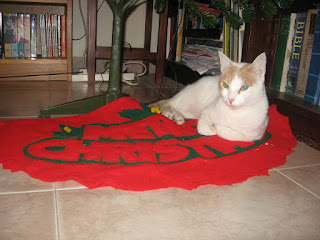 Joan looked cute under a pile of cushions too: 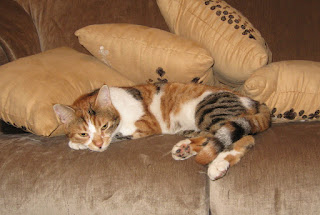 It's only as I look at this photo with hindsight that I realise she doesn't look all that well.

On Tuesday, she didn't appear all day. Our thoughts were mainly with a relative in the UK who was having quite serious surgery that day, but when Joan still hadn't appeared by lunch-time I began to be concerned. I've been worried about her several times and gone looking for her, and she always appeared in the end, so I tried not to worry... however, by the evening, we began to fear that she was gone for good.

We've lost three cats unexpectedly over the past ten years or so. We have no idea what happened to any of them. We made several guesses: that our cat-disliking neighbour had captured her, that someone had 'stolen' her to sell, that she'd been run over. I felt quite tearful; I had determined not to get too attached to Alex and Joan, but she had certainly got under my skin.

We also became quite worried about Alex by Tuesday evening, when he was very lethargic and off his food. Checking online, we thought that perhaps he was stressed or even grieving for Joan, if he had seen whatever happened to her. We brought him to sleep on our bed (something we don't usually allow) and he seemed happy, then slept all night.

On Wednesday, he ate more but seemed to be uncomfortable, walking awkwardly, sleeping most of the time, not wanting us near. We took him to our room again last night, and today he's seemed rather better, much more alert and purring when we stroke him. We would have consulted a vet if we could have done but they were closed already for the Christmas break.

So we now think that perhaps they both caught some kind of feline bug - apparently there is one going around - and that Joan, who has never been as strong as Alex, succumbed. I miss her, and he's going to miss her too, but we're relieved that he's more like himself today: 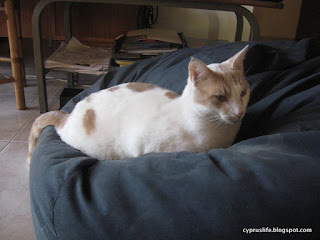 If you've come on this post by chance and are interested in knowing more about our family, here's the link to this year's Christmas newsletter - written a couple of weeks ago, before Joan disappeared.

And as if all that weren't enough, yesterday Becky managed to break a shoe and fall down our outside stairs when carrying David down, although automatic parent instinct took over and he was fine; Becky has a nasty graze.

On a more cheerful note, David seems to enjoy most new experiences, including riding in a special toddler shopping trolley when we did our big grocery shop at Metro yesterday: 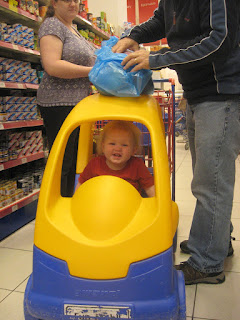 He's been teething, and keeping his parents awake at night, so with everything that's been going on we're all quite tired. But we hope everything is mostly organised for tomorrow... and I may even go to this year's carol service this evening.

Merry Christmas to anyone who reads this.

It's so nice t have a little one around at this time of year. Gotta love the hat photo.

And having the cat perking up is a nice present.