Happy New Year (from a chilly but mostly sunny Cyprus)

After the busy-ness of the pre-Christmas season, and the socialising and eating of the day itself, we decided to take a couple of days out as a family. As there are six of us, we rented a large car for a couple of days (courtesy of our friendly local car rental guy who had taken his seven-seater off the road for the winter, but was still prepared to give us a good price to use it).

The weather was due to be mostly sunny but a bit chilly on New Year's Eve, so we thought we'd head to Kurium, the archaeological site a little beyond Limassol. Becky had only been there once before - when she and Daniel were newly engaged, and we went to see a Shakespeare production - but there was no opportunity, then, to see anything other than the amphitheatre.

We had a slight contretemps on the way there, when David reached for the door handle of the car, while we were driving along the motorway, and managed to open the door.. but Becky held it closed until Richard pulled over onto the hard shoulder, and after some study of the car manual Daniel discovered how to set the childproof lock on the door.

By the time we arrived, David was more than ready for some walking. He's very independent and doesn't like holding a hand, unless he needs it for extra balance, so he wears a little backpack (which he loves) that has an attached leash to keep him safe: 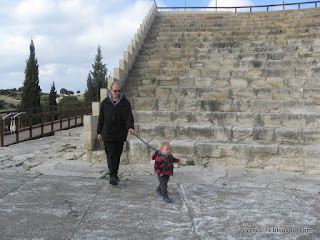 We were impressed with the way he climbed the amphitheatre steps at great speed, full of energy, despite the fact that each stair was about waist-high for him: 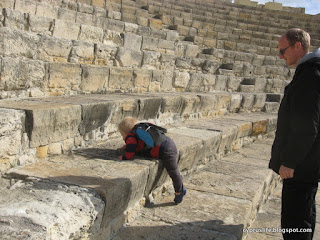 Since the last time we visited, more paths have been set out, making it easier to visit the entire site, which is pretty big. Although we've been several times before, we'd never previously noticed what Becky pointed out: a floor with hexagonal tiles to play an ancient game of Settlers of Catan.... 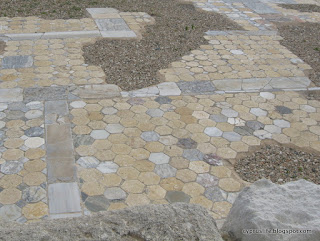 Despite being decidedly chilly in places, walking kept us warm, and the sunshine on the nearby sea was very attractive: 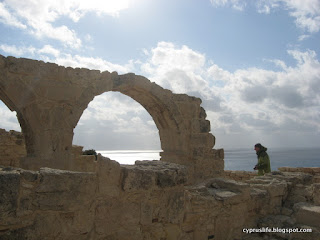 Here's a place showing how the under-floor heating for the Kurium baths would have worked a couple of thousand years ago: 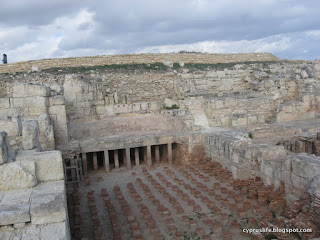 And here's one of the mosaics that still remains, despite being battered by the elements over the centuries: 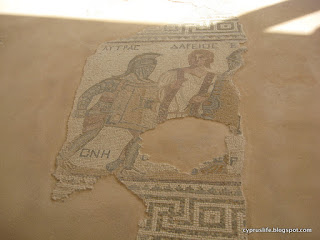 Richard took his big camera and a tripod so we could take some family photos using the timer, and David insisted on carrying the tripod some of the time: 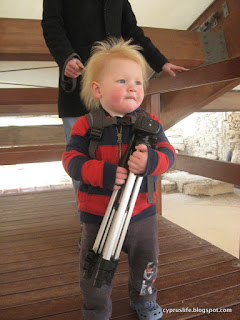 Eventually we'd had enough of walking and decided to find a nearby taverna to have some lunch. Here we are finding our way back to the car: 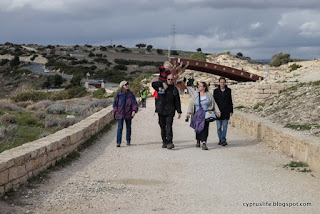 In the evening we were invited for a meal at our local friends' house, followed by some games: 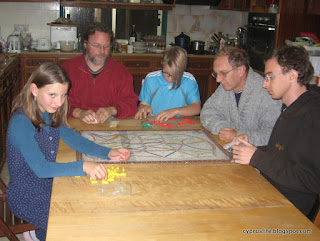 We didn't stay till midnight. David and his parents left about 8.30, although Becky returned half an hour later once he was settled, but by about 11.15 at least two of us were yawning, and could see no point in staying up just for the sake of saying we'd done so. By the time I'd done a bit of necessary pottering in the kitchen, after returning home, it was midnight anyway so I heard the short burst of local fireworks, but shortly afterwards was fast asleep. And to my astonishment, I slept until 8.00am... two hours later than usual.

Today we decided to go in the opposite direction and explore some of the region beyond Agia Napa, where there are sea caves and (we've been told) some interesting walks. Since it's New Year's Day we didn't want to risk potentially spending a long time trying to find an open restaurant, so we took the makings of a picnic; I made some hummus and cut up some vegetables and removed some pittas from the freezer...

It was even colder when we arrived at Cape Greko, but good to be able to see the caves, even though we had no desire to get wet trying to explore them. This is the area where hardy and brave people like to jump into the sea, but it doesn't appeal to any of us... and there was nobody attempting it today. 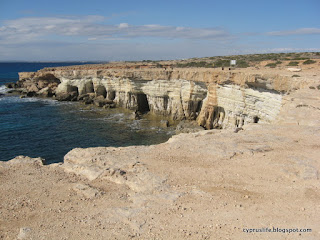 Another scenic shot of sunlight glinting on the sea with some rock formations in the foreground: 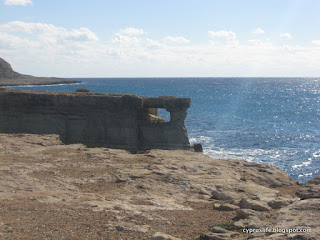 We soon realised there wasn't very far that we could walk easily, so we drove a bit further to Konos Bay, considered a particularly attractive spot. Daniel decided to carry David in the Ergo carrier, after he (David, that is) had done a bit of running around: 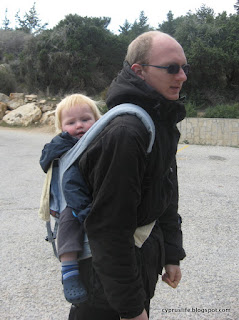 We set off on a reasonable looking path to find some other caves, or perhaps the beach: 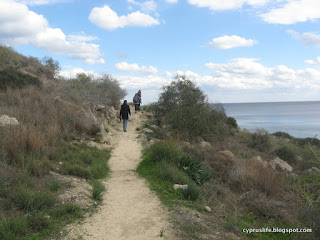 However the path got more complex, requiring significant scrambling, and we didn't feel like continuing to the end. 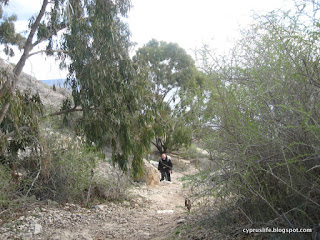 We looked at the beach - which colleagues took us to visit eighteen years ago, but which we hadn't been to since - but it looked cold, and the place selling drinks was closed, and we were beginning to feel a bit peckish. 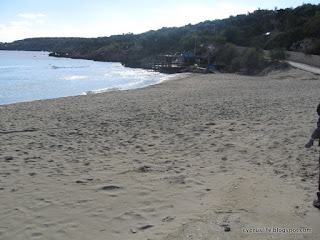 We hadn't planned to have our picnic on the beach, but were surprised to find that eating, along with various other activities, is prohibited: 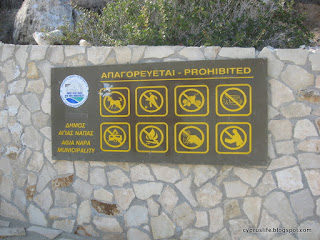 Since everything was closed - even the loos - we decided to use the outside restaurant tables and chairs to eat our lunch, which was slightly delayed due to the pittas being still partly frozen... however we waved them around in the sunshine, and laid them out separately on our plastic plates, and gradually they thawed sufficiently to eat.

However we felt extremely cold by the time we'd finished, so packed up and drove into Agia Napa, hoping to find somewhere to buy hot drinks.

It was like a ghost town: most places were closed, many boarded up or empty. But at last we saw an open Coffee Island, and it even had a parking space outside: 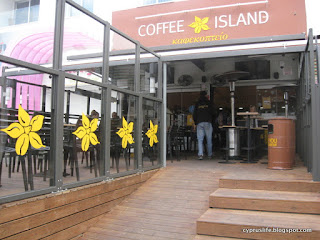 After hot drinks all round (and a large cookie for David!) we decided to return home, where two people took naps, three played another game, and I decided to upload my photos and write my first blog post of the year.