While most people find chairs or sofas comfortable, I've always preferred sitting on the floor. When I sit on a sofa to read, or watch a DVD, I usually take off my shoes and curl my legs up under me. Even sitting at the computer or the dining table, I often have one of my legs curled up next to me.

The problem in Cyprus is that instead of carpets with wooden floors underneath, most floors are hard, covered with marble or large tiles. In the winter, they're cold as well as hard, and while I do sometimes sit on the floor, I can't do so for lengthy periods.

When we lived in the UK, my second favourite place to sit was on a large beanbag. We didn't bring it to Cyprus, as it was quite bulky, and I have no idea what happened to it. I assumed we could buy beanbags here - the boys liked them too - and was very disappointed when I discovered that none of the local furniture shops stocked them.

Indeed, it wasn't until the latter part of 2006 that we suddenly spotted beanbags in the Nicosia 'Super Home Centre' DIY shop. I would have liked a brown one for my study, but the choices were blue, green, or brightly coloured/patterned ones. Tim chose a green one: 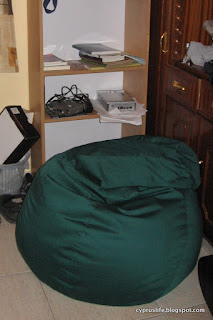 Daniel had left home by then, but we'd vaguely assumed he would return at some point, so we bought him a blue one: 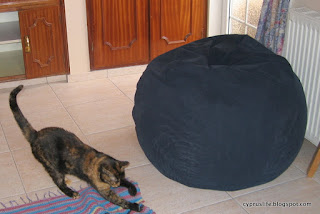 That photo from 2006 shows Sophia, who considered Daniel her human, and thus all his property was hers too.

After some thought, I also chose a blue one, thinking I might keep it in our bedroom but quickly realised that I wanted to read or relax in my study, so that's where it sat for most of the past nine plus years.

The cats liked the beanbags very much. Here are Sophia and Cleo in 2009 sharing my beanbag: 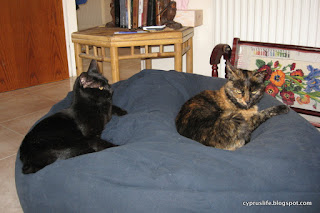 Tim's green beanbag wore very well; he has it in his flat now, and despite plenty of use by cats, it still looks pretty good: 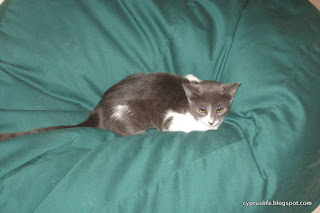 The blue ones, however, seemed to fade and develop unsightly marks.: 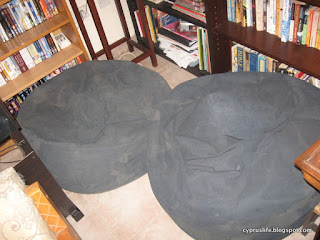 They're machine washable, but it's rather a nuisance carefully emptying all the polystyrene beans into a large plastic sack in order to do so, and then getting them back in the container afterwards - there are always bits of polystyrene floating around for days afterwards.

I had wondered if it was possible to get a new cover for a beanbag, but couldn't find anywhere that sold beanbags or covers in Cyprus - even the SuperHome Centre seemed to have stopped stocking them - nor did lengthy searching online reveal anything.

Perhaps I could have made a cover, but I'm not good with sewing, I don't currently have a sewing machine, and there's not a great deal of choice of fabric around here. And I didn't get round to it.

Since losing Alex's sister Joan, he's tried to snuggle up to Cleo (very elderly now but still with us...) and she tolerates this, but really isn't keen: 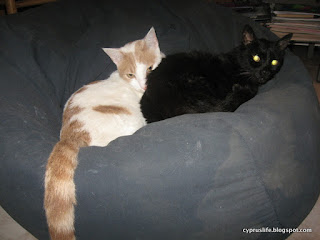 And when they're both there, I have nowhere to sit. The other blue beanbag is fine for cats but quite squashed and not particularly comfortable.

However, I now have a nice sofa in my study, so I sit there if the beanbag isn't available... and I'd stopped even thinking about getting a new cover.

We had to go to the Larnaka SuperHome Centre yesterday. We're having some work done on the house, and needed to get some wood to repair rotting window sills. And some sealant, and one or two other bits and pieces. What a very useful shop it is, even if the lights make me feel queasy after about twenty minutes.

As we went into the shop, I saw a furniture display and a couple of faux leather beanbags. I glanced at them, but faux leather and cats do NOT go well together.

Then I saw that a beanbag on the other side of the display was made of fabric.

Unfortunately, it was bright orange.

At the far corner, was a beanbag covered in brown fabric. Pretty much the same brown as the doorframe in my study. Heart beating a little faster, I went and felt it... and sat in it. It was much higher than my old blue beanbag, and will need a bit of squashing, but otherwise it was perfect!

I find it remarkably difficult to spend money on myself (well, other than second-hand books of course), so I went to discuss it with Richard. He said afterwards that my whole face had lit up. I have Christmas money and even birthday money that I had not spent, so - unusually for me - I made an immediate decision to buy it.

We had a slight contretemps in that we'd apparently picked up the 'display' beanbag, which we weren't supposed to do; a shop assistant tried to find another one the same colour that was still in its packaging. But there wasn't one, so they agreed that we could take the display model.

Here it is in my study, looking so much nicer than the blue one ever did: 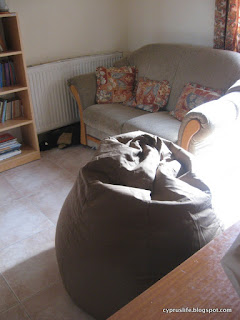 I thought that the cats would like having two blue beanbags in a corner of the living room, but no... they like the new beanbag as much as I do. And it does go rather nicely with Alex's colouring: 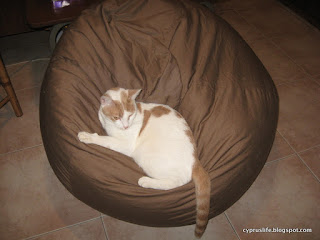 (For those following the Alex saga, he seems to be a lot better, and is able to sit and crouch down properly again without pain, but still isn't using his tail. Another vet appointment tomorrow...)

So very glad that Alexander is better.