When our young friends were here last week, one of them asked what the odd noise was in my study. I explained that I was scanning some negatives. She looked at me, a little puzzled, and asked what I meant.

'I'm scanning some old negatives of photos,' I explained, 'and putting them on my computer.'

'Do you mean you're printing some photos?'

'No...'  I paused, and realise that this is one of the technological divides of recent history. A child of seven years old may never have seen photo negatives. Yet until ten or fifteen years ago, the majority of cameras used them.

I've always liked taking photos. Perhaps it's because I don't have much of a visual memory, I like to be able to capture people's faces and special moments on film. I had my first basic camera when I was about six or seven, with black-and-white film which we developed and printed at home. I progressed to a 35mm camera during my teens, and was very organised with my negatives, filing them in albums along with 'contact sheets' that showed positive images in thumbnail sizes, and an index at the front.

I continued doing that up until about 1978, when it became clear that developing and printing at home cost rather more than sending photos to be printed. And I wanted to start using colour film, which was a great deal more difficult (and expensive) to process at home. So I tried several different companies, both high street ones and mail order ones.  Here are a few of the envelopes I found recently: 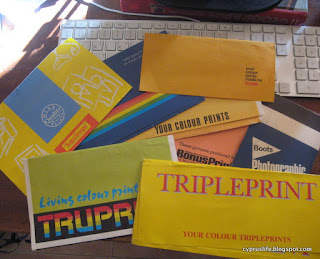 Since the negatives came in little packets attached to the ones containing the prints, it didn't occur to me to store and catalogue them anywhere else. The prints went in albums, those I didn't want got thrown away (eventually), and the envelopes with the negatives were stored in random boxes and drawers.

I had vague thoughts of eventually getting bigger prints of some of the pictures, but it never happened... and the collection of negatives got larger and larger. I did label some of them with the date and sometimes even the subject matter, but mostly I forgot.

We bought our first digital camera in 2003, but the print quality wasn't great, so I continued using my 'ordinary' camera for prints, with the digital one for newsletters, and the family website, and - when I started it - this blog. That was a definite improvement on waiting for photos to be printed in the UK, and then using our elderly scanner to get them transferred to computer.

In 2005, after losing our first digital camera, we splashed out on a nicer one and found that the prints were now sharper better quality in general than those from my film camera. So the latter was, at last, retired, and the negative collection stopped increasing.

When we first moved to Cyprus, my old negatives were stored away in our UK house, but eventually came out here when we sold it. They were then stored in a high cupboard in our new house. Meanwhile we'd also managed to collect several slides that belonged to my grandparents, and a few quite old negative plates that my mother had been keeping. I knew there were places where one could get these things transferred to CD but they were expensive, and there were just so many of them...

In May 2007 my father was staying here, and wanted to buy me a nice present. I couldn't think of anything I wanted at first, then I wondered aloud whether it was possible to buy a scanner that would also do negatives and slides. He and the more technologically aware members of the family went to investigate, and returned with a 'CanoScan'.

Sophia, who was always a very curious cat, investigated it thoroughly when it was first set up: 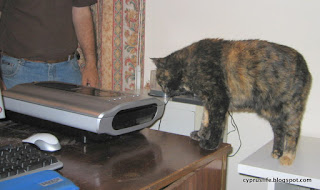 In 2010 we decided to make a special album for our thirtieth anniversary, so I hunted through photo albums and scanned either photos or negatives (if I could find them) to get pictures of us and the boys when we were younger.

A few years later, we wanted some photos for my father's 80th birthday celebrations, so I scanned some of my old (and well-organised) black-and-white negatives.

A year after that, a cousin wanted some old photos for her parents anniversary, so I did some more scanning. And I thought, several times, how nice it would be to get ALL my negatives scanned, and organised on the computer, and maybe made into new albums....

... but it was all quite daunting. I did spend a few Saturdays doing a lot of scanning, but during the week it returned to being a spot for Cleo to sleep on: 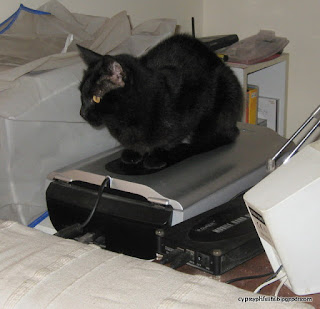 Then one day, last Autumn, I wanted to scan something and the scanner refused to speak to my computer. I tried everything, to no avail. My technically minded son tried different leads and different USB ports and everything he could think of... and it still didn't work.

We assumed that the scanner had stopped working.  Richard reminded me that he had an identical one which he rarely used, so suggested we switch them.  Several weeks later we tried... only to find that his one wouldn't speak to my computer either, while my one worked perfectly with his computer.

It turned out to be a problem with the operating system, but after much frustration and many experiments, we finally got a version of the CanoScan software that works for me. A little klunky: I have to switch the scanner off and on again after each scan, but I can deal with that.

So I decided to make the effort to work through ALL my negatives, one film per day.  If the last software update made it more difficult to scan, the next one might make it impossible; the scanner is, after all, nearly nine years old.

Here are some of the negatives waiting to be scanned: 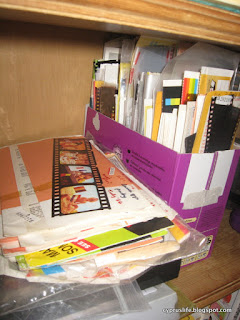 I've done about ten films so far.  There are at least two hundred more to do, but that means I should have finished by the end of the year.

Back to my small friends, their mother and I managed to explain, roughly, what negatives are and how they worked. The girls' response was that they sounded SO COOL! They thought I should put them on my walls as decoration, because it would be AWESOME to see photos where all the colours were reversed...

I don't always like modern technology, but I am very happy with my digital camera. I wouldn't ever want to go back to the old methods.

I've been doing much the same thing as you describe.

The scanner works fine with b&w negs, but colour ones are more iffy, and I sometimes have to try to adjust the colours manually, which is not easy. It seems to be calibrated for Kodacolor, but most of our more recent photos were on Fuji film, and have a greenish cast.