Update on Alexander the Great

Meanwhile, for those who follow the antics of our cats, poor Alex hasn't been doing doing well. His sister Joan of Arc never did come back after disappearing before Christmas; we can only assume, now, that she was run over.

We thought he was grieving at first, when he went very quiet and didn't purr, but then realised that his tail was painful and that he was walking very slowly.

We took him to the vet, who thought he might have an infection and prescribed antibiotics and pain relief; he did much better for a while, then got worse again so we took him for a second visit. She thinks he probably has an injury to his pelvis which will be slow to heal, so he's on more pain relief currently.

He's definitely better than he was, but his tail droops (the vet doesn't think it's broken) and he's still not racing around. He spends most of his time sleeping on a beanbag: 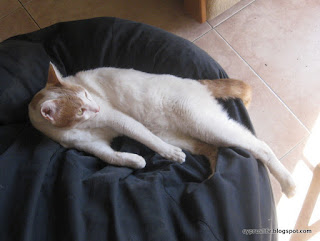 He has another vet's appointment tomorrow. He's really very good about getting into the basket, although he hates car journeys. The vet says he's one of the most co-operative cats she has ever met.

Gosh! I had hoped that Joan of Arc would make a sudden re-appearance. Now, you have a worry over Alexander; well, I shall have a wee word with Francis of Assisi to ask that he pray Alexander will heal quickly. Do keep us informed.