The last few weeks have flown past. The year started with a very chilly spell, leading to overnight frosts and ice on plants when I went for early morning walks: 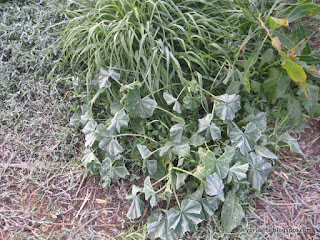 Flamingoes started flocking to the Salt Lake, more than ever before. Perhaps, since it never totally dried out, there is more food for them than normal, although we've no idea how they know before they arrive... 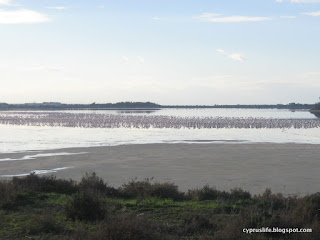 The Christmas/New Year break goes on for quite a long time in Cyprus, since Epiphany, on January 6th, is another public holiday. But schools returned on the 7th, and life began to return to normal.

We walked down to the sea front on what looked like a lovely sunny day, only to have grey clouds start to gather when we were nearly there, and a gorgeous rainbow greeted us as we arrived at Finikoudes: 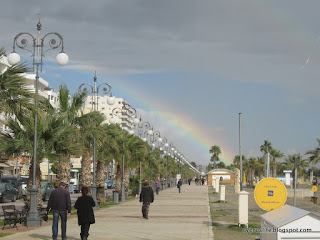 Becky had taken David to paddle in the sea a couple of times, but it was a little chillier so they hadn't planned to let him go in the sea. But he loves it, so I volunteered... 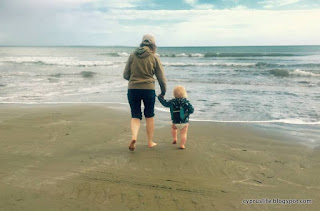 With only a week of their holiday left, I was treasuring every moment of Grandma/David time. The water was a bit chilly, but didn't feel too bad once I was in; and we didn't go more than ankle deep.

After we'd washed off the sea water and sand, and put socks and shoes on again, Daniel and Becky took us for ice creams at a little shop in a side street which they had discovered before. They were very good indeed! 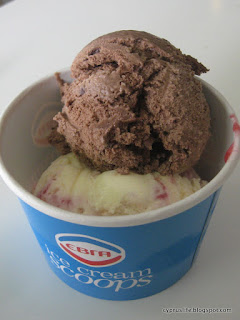 That's chocolate, with strawberry cheesecake ice cream underneath. A little taste of heaven.

A few days later we walked along the other part of the sea front, the newly renovated section beyond the fort. Like so many small children, David wanted to walk on the wall: 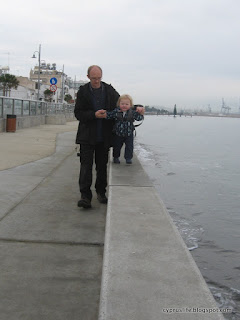 That was our last sea front visit. On Tuesday we met our friends in the Municipal Park, where David led the way in deciding where to play, and 'drove' his rather older friends on the roundabout: 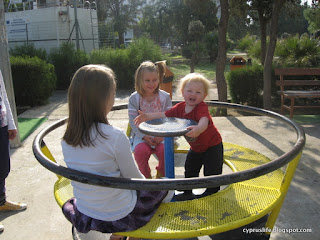 Tuesday afternoon, we took them to the airport for their return to the UK. Our house is now mostly back to normal; we no longer have to keep doors shut; the high chair is put away; toys and books are back where they belong.

We were sad to see them go... but are so pleased that modern technology enables us to keep in touch with David (and, of course his parents) via Skype or Facetime.
Posted by Sue at 14:52